Ultraman 80 episode 42 "The Kannon Is Strongest"

Zurasuimar (ズラスイマー Zurasuimā) or Zuraswimer[1], was a kaiju that appeared in the TV series, Ultraman 80. It appeared in episode 42 of the series.

Zurasuimar was monster that lived in a volcano, it loved the heat and lava until the 1855 Ansei Earthquake when it awoke for the volcano and decided to live under (where would later be) a Kannon-sama statue.

Many years later, two men that wanted 2 billion yen under a Kannon-sama statue in Ooyamachi decided to blow the statue up with dynamite to see if they can find the 2 billion yen that was dug there in 1855, but instead of finding 2 billion yen they awoke the monster Zurasuimar! 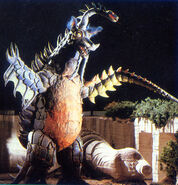 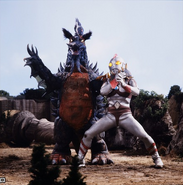 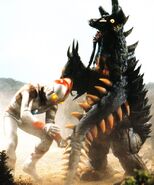