None
Zoon (ズーン Zūn) was a monster that appeared in Ultraman: The Adventure Begins.

A peaceful monster whom arrived in Utah from the destroyed Planet Sorkin, Zoon had no idea where he was or what to do. His gigantic size created a panic and its clumsiness destroyed several cabins by accident. While wandering around, the National Guard began to open fire on it! By the time the Ultra Force arrived to help in the battle against the latest creature, they quickly saw it didn’t desire carnage like the others. It was hiding from the attacks, scared half to death as explosions rocked the area around it.

In order to protect it, Chuck transformed and carried it off to safety. Seeing this as treason, the guard also fired on the Ultra Force! As the trio was believed to be dead, Scott and Chuck helped Zoon travel to a new world. Inside Chuck’s energy bubble and given a push in the right direction, Zoon headed to a new world where he could live and do no harm. 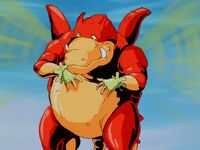 Chuck and Zoon
Add a photo to this gallery
Retrieved from "https://ultra.fandom.com/wiki/Zoon?oldid=511327"
Community content is available under CC-BY-SA unless otherwise noted.