Awoken and placed under control by Hiroya Fujimiya, also known as Ultraman Agul, this massive beast was led to the surface to destroy Diglobe. X.I.G. attacked it first with its powerful jet fighters, but simple rockets and missiles failed to destroy the beast. Not knowing what Ultraman Agul was doing, Gamu Takayama transformed into Ultraman Gaia and managed to fight the beast to a standstill until Ultraman Agul appeared. Ultraman Agul leaped onto its back and began to pry the massive shell apart and a beam of pure energy fired upward as Ultraman Agul aimed it at the falling Diglobe. The meteor-like alien was hit by the beam and destroyed completely, but the blast also took its toll on Zonnel and nearly killed it. With Diglobe dead and Ultraman Agul vanishing, Ultraman Gaia picked up the monster and flew away. He blasted a hole in the side of a mountain and dropped the Kaiju inside before closing it shut. Shadow of Space, Light of Earth Agul vs. Gaia

Weeks later when Ultraman Agul turned his back on humanity, the giant awoken a second Zonnel deep underground in the Arizona desert. The massive monster rose up and was attacked by the American army, but the beast's energy balls destroyed the tank battalion in just a few short blasts. X.I.G. soon attacked the beast from the air, but even their strength wasn't enough to stop the rampaging kaiju. Hearing the news in Japan, Gamu transformed into Ultraman Gaia and flew to America to fight the beast. Zonnel once again fought the hero, pushing him back with tackles and claw swipes. As Gaia's timer began to flash, the hero began to charge his Photon Edge, but remembering the words of a friend whom reminded him that these creatures are merely animals, Gaia instead used his calming beam on the angered kaiju. Weakened, Zonnel turned around and retreated back underground and Ultraman Gaia returned to Japan. The Determination of Agul

Months later, as Zog led the swarm of Dobishi on an all out strike against the Earth, Zonnel once again awoke to fight. The powerful guardian unleashed its attacks into the swarm of alien insects, but the holes simply closed shut with more. In response, the swarm attacked the creature with a Kaiser Dobishi, but choosing to defend the creature, the American armed forces unloaded on the Kaiser Dobishi with dozens of tanks. The weapons fired round after round into alien before it fell down dead, but the swarm continued to rage and Zonnel continued to fight until the very end of the Dobishi and Zog. The Cry of the Earth Earth is Ultraman's Star

Zonnel II awakened from the signs of Gakuzom's arrival as Fujimiya attempted to return the monster back to sleep. GUARD forces open fire on said monster and this caused Fujimiya to be blamed for its awakening. Ultraman Gaia: Gaia Again

Zonnel was released three times in the Ultra Monster series. The first one released was Zonnel II in 1999. The regular Zonnel was released in the same year but as its original and is a SP, he was also re-released in 2000 with some different coloring. Every figure is 6 in tall and are accurate to the shows Zonnels. 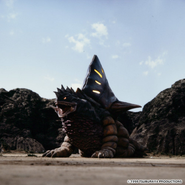