Ultraman Dyna episode 39 "The Light and Shadow of the Youthful"

Hiroyuki Yamazaki was the assistant of Dr. Otomo, the mad scientist that created Neosaurus. He wished to strengthen the bodies of Earth's lifeforms, as well as exact his revenge against Super GUTS. And so, to begin his vengance, he stole a sample of Evolu's Cells which were modified by Yamazaki himself, and later used them to create Clone Daigelun. After Clone Daigelun was destroyed, Yamazaki threatened to release a warhead containing the perfected Evolu Cells across the world. Super GUTS sent Kenji Fudo and Shin Asuka into space onto an asteroid where the mad scientist's transmission took place. Shortly after, the duo landed in a secret hanger, and found where the warhead was stored. Once Kenji and Shin shot down soldiers made from the cells, they made their way to the mad doctor only for him to trap Shin and convince Kenji to slide his gun away from him. Once the mad doctor and Kenji wounded each other with their guns, the mad scientist pulled out a syringe containing modified Evolu Cells and injected them into himself, transforming into Zomborg. Shin quickly transformed into Ultraman Dyna and did battle with the mutant cyborg and try to stop the warhead, but Zomborg managed to delay the hero from stopping the warhead from reaching Earth. However, Dyna did not give up and soon used the Solgent Beam to destroy Zomborg and managed to stop the warhead from reaching Earth, putting an end to both Yamazaki and the threat of the Evolu Cells.

Zomborg Soldiers (ゾンボーグ兵 Zonbōgu-hei) were Yamazaki's android soldiers which were empowered by the Evolu cells. They were tasked to guard Yamazaki's hideout until all of them were shot down by Asuka and Kenji. 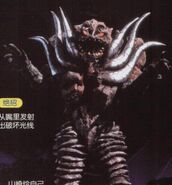