When Gijera appeared, it was the first sign of Gatanothor’s reawakening and while Ultraman Tiga successfully struck the ancient beast down, Daigo continued to suffer awful nightmares of the visions he would received from the encounter with the evil plant and Gijera’s brother in destruction. Zoiger would soon awakened elsewhere in the world, digging free from his ancient tomb not long after ancient ruins were uncovered at the sea floor, ruins of one of the ancient cities. As the submarine examined the ruins, it was destroyed by the deadly monster. The Ultra-Ancient Monster was quick to erupt from the depths and descend on Sydney, Australia, obliterating buildings with his fireballs. As the creature’s path of destruction continued, GUTS arrived to attack, chasing the airborne abomination with their GUTS Wings but it proved extremely fast and agile, dodging their attacks with ease. Rena chased the monster high into the air, pushing her craft’s limits and soon, Zoiger turned and fired, Rena dodged but Daigo was hit, forcing him to eject. GUTS continued tracking the ancient evil as meanwhile back at their base, Iruma received a grave warning, the Ruler of Darkness was rising once more. GUTS lost track of Zoiger and was forced to return to base. Later, Zoiger reappeared and GUTS engaged him yet again as the ancient city was examined once more. Rena, using a new rocket, pursued Zoiger, managing to match his speed but her firepower couldn’t take him down. As they chased the Kaiju high above the clouds, Daigo revealed the truth about himself, that he was Ultraman Tiga, to Rena, and transformed to challenge Tiga’s ancient enemy, turning to Sky Type to continue the chase, allowing her to shoot Zoiger’s wing off and send it plummeting to the ground. Zoiger struck hard but his hide withstood the crash and he survived. Rising to the ground, he opened fire on the newly landed Tiga. Knowing it was of no use, Zoiger grabbed its remaining wing and wrenched it, finally tearing its own wing off. Throwing it down, the monster charged Tiga and jumped over him, assaulting him with blow after blow. He finally began choking the hero till his timer started flashing, only for him to transform into Power Type and throw Zoiger overhead. Tiga then leapt forwards and brought a hard kick down on Zoiger’s skull. Following up with a barrage of kicks, Tiga sent the monster flying backwards with a powerful front kick. Zoiger fired two energy balls at Tiga but the hero caught them and threw them right back. With Zoiger stunned, Tiga charged the Deracium Beam Torrent and unleashed it straight into Zoiger’s chest, killing him. But alas, Zoiger was only a taste of what was about to happen, as Daigo got a message saying that more Zoiger had appeared, in fact, an entire army of winged fiends had appeared all over the world to herald the return of their master, Gatanothor. As their master rose from his ancient slumber, the Zoiger unleashed their destructive power on the cities of mankind, destroying all in their path. Having barely destroyed one Zoiger, GUTS had no idea how to deal with an entire army attacking major cities all over the Earth. The TPC tried their hardest to stop the demons but their power was no match for the ancient devils. When GUTS attacked their master, a Zoiger was summoned to protect Gatanothor but against the experienced fighters of GUTS and Hayata, the beast was shot down and killed. Soon, Gatanothor was challenged and killed by Glitter Tiga, and the Zoiger's reign of terror brought to a screeching halt, ether vanishing completely or going back into their slumber.

The creatures instantly spread forth, wreaking havoc on Japan as they picked up and slaughtered people. Buildings crumbled by the sheer number of monsters smashing into them, but GUTS was quick to fight back. Daigo had also been given the Black Spark Lens, allowing him to transform into Tiga Dark. The flying reptiles retreated back to their layer, but when GUTS and Tiga lead a new campaign against the evil ones, the man-sized killers were released once more. Attacking the gigantic GUTS ship, it took all the power of GUTS and the Super GUTS rookies to defeat them. Firing a massive beam of energy into the cave in which they flew from, the human forces completely obliterated the monsters.

The Shibito-Zoigers made their appearance as Tsutomu Shinsei travel into Tiga's timeline via XIG Adventure to reach Daigo, finding him in the middle of fighting Camearra. Charija also made a passing mention to their appearance that he obtained a Galra from "a world where flying pterodactyls rule", implying that he obtained the monster from a planet where Zoiger were the dominant lifeforms. Tiga, Dyna, and Ultraman Gaia Novel: The Adventure in Hyperspace 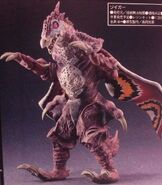 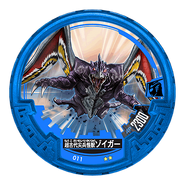