This may not be the article you are looking for. For other uses, see Zoffy (disambiguation).

"The planet's wish to live.. The wish to protect people.. That Became My Power!"
"I'm not trying to be a god, I fight to defend others!"

Both parents are deceased

Residents of the Land of Light
Ace (Student)

TBA
This is the version of Zoffy seen in the Ultraman Story 0 manga.

One of the residents of the Land of Light. When their sun died, the people of M78 went to work building a replacement, so, they created an artificial star called the Plasma Sun. Unbeknownst to them, the Cicada people interfered with the device by adding an unknown element in order to use the sun to evolve themselves further. When the Plasma Sun was turned on, the people of M78 rejoiced, but soon everything fell into chaos. Many animals, and even some plants, were mutated into giant monsters. Also, the people were transformed into silver giants with great powers. Zoffy himself protected the Plasma Sun control towers with his unexpectedly powerful beam.

After the battle, the Ultras gathered to contemplate their situation and mused on how the Plasma Sun was supposed to save their planet, which they'd even renamed, the Land of Light. However, now their civilization was in flames from the many monsters that appeared and their bodies had been mutated into strange giant forms. Then, Father and Mother of Ultra appeared and not only renewed their sense of hope, but Father also showed that the supposed 'clean energy' from the Plasma Sun now contained an unknown element that was clearly responsible for all the mutations. It was then that strange vessels appeared in the sky and a voice was heard declaring that they were responsible for the alteration to the Plasma Sun. They thanked the Ultras for their unwitting compliance in their scheme and left declaring that they would conquer the galaxy. This threat, plus, the light spreading all over the galaxy, meant that more monsters would arise on other worlds. This convinced them to use their newfound powers to go out and protect the innocent wherever they could. Zoffy, along with several others, some of whom would come to be known as the Ultra Brothers, left their planet for the far reaches of space.

Zoffy came across a planet with humanoid inhabitants. Upon entering a town there, he came across a family comprised of a daughter named Sara, her younger brother Cal, and their father. The three explained that their world was being plagued by monsters, which were now advancing on the village. Seeing the defense of the village as his responsibility, Zoffy ran off to battle with his transformation hidden by a fireball. He appeared in Ultra form in front of the villagers, many of whom assumed him to be just another monster. The mutated beetles spat fireballs at Zoffy who raised a shield to deflect them. Although he was pushed back by the force, he was able to stave off their attack. However, most of the villagers, save Sarah, saw only two monsters fighting and despaired. Zoffy fired his M87 Beam and destroyed the three beasts. However, he found that he overdid it, because his powers were new to him. The blast was nuclear in scope and destroyed much of the village, along with some of the villagers, to his horror.

Later, Cal and Sara found Zoffy back in human form as he sat among the wreckage he'd accidentally caused. Sara spoke of Zoffy's giant form commenting that she believed that the giant was trying to protect them. Cal refuted that idea by declaring that the giant was no different from the monsters and that, because of him, their father was reduced to nothing but an arm. He was referring to the fact that his father had pushed his children out of the way of the large debris from Zoffy's blast. Zoffy ran off in distraught over the outcome of his attempts to help these people. Eventually, he found himself overlooking the remains of the ruined village and reminisced how his people had first become Ultras and how the plants and animals were mutated into monsters and rose up to destroy them. Zoffy remembered his battles and the promise that he and the other Ultras had made to protect the people of the universe from the scourge that originated on their world. Given the recent events, he could not help feeling ashamed of himself, but as he knelt there he noticed something.

Some time later, Cal and Sara returned to their village, while the other villagers elected to leave and find another home. Sara and her brother refused saying that the act would be paramount to giving up. When the natives noticed Zoffy trying to move a rock that blocked their former well, they lashed out at him. Then, in an anger born of despair, they threw rocks and insults at him. However, Cal and Sara stood up for Zoffy and went to help him, which eventually gave their people some form of hope. The other villagers eventually came and helped the three move the rock and clear out the well. However, when they found that there was a thick boulder still blocking the way, they began to despair again. Still, Zoffy refused to give up, which caused his bracelet to react to his fortitude and shine with power. Taking this to mean something, Zoffy slammed his fist into the ground and used his great strength to put a large crack in the rock. Sensing the trembling, everyone vacated the well before the pressurized water suddenly burst out of the ground and both covered the surrounding land and renewed the hopes of the people.

Amazed at what had happened, Sara accused Zoffy of being responsible for this 'miracle'. In response, Zoffy denied it by stating that it came about due to their combined efforts, plus, other numerous factors. While the natives rejoiced and began planning to rebuild their lives, they suddenly noticed an ominous shadow over them. Everyone looked up to see another monster that resembled the three previous ones, but it was almost three times larger. Zoffy tried to get everyone to leave, but they were in too much shock to move. To save them, Zoffy transformed again and stopped the monster's foot from crushing them just in time. Then, he threw the monster away from him, but was knocked back when he put up a shield against the monster's fireball. Though he wasn't defeated, Zoffy's Color Timer began to flash despite the short amount of time he'd been in his Ultra form. This was because of how he'd recently used his powers to clear the well. He collapsed with his strength fading quickly and he lamented the idea of dying so far from home without gaining any understanding of his powers. However, Zoffy began to stir again at the cries and chants of the natives who were compelling him to stand. Somehow, he drew strength from this and he stood up with his color timer turning blue again. Then, with great resolve, he fired his beam again. It struck his target, but instead of creating a massive blast, the beam tore through the monster and fired off into space. The rest of the monster's body disintegrated from the great heat of his beam.

With that done, the people gathered around him with their thanks and praise. Then, Zoffy waved goodbye to a teary eyed Sara and departed, most likely, for another world or home.

Zoffy would later respond to the fake Ultra SOS sent by a controlled Rutia on the planet where Ace was held captive. As Ace was about to be modified, Zoffy burst into the confinement chamber and shot at the modified Ultramen with his Z Ray, before freeing Ace and urging him to fight. When Ace hesitated to shoot Rutia, Zoffy provided encouragement. Eventually Rutia committed suicide to save Ace, causing Ace to release a Metalium Beam in rage and destroyed the area. He then annihilated the Baltan Spaceship with Zoffy.

Unlike his original counterpart, this Zoffy had his own human form. He transformed using a bracelet with special Plasma Spark Ore, which is a metal that absorbs the light of the Plasma Sun. When transforming, the light of the bracelet surrounds and transforms him. His body breaks up into light particles and changes into an Ultra Form. 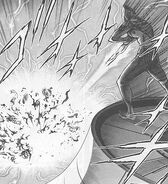