"As soon as (Zetton's) systems are in place, mankind will be destroyed along with this stellar system. There are nearly 13 billion intelligent life forms confirmed by the Star of Light. When one of them disappears, nothing changes in the universe. [...] Was it worth risking your life for the native creatures of this planet, Ultraman?"

Tohl Narita (base design)
Zōffy (ゾーフィ Zōfi)[2] is a character of the 2022 film Shin Ultraman. He is a reinterpretation of the similarly named character from the 1966 TV series.

Aside from being a counterpart of the original namesake, this Zōffy is far more similar to Alien Zetton, the master of the monster Zetton from the final episode of the original series. This interpretation of the character is inspired by misinformation about Zoffy as a villain who controlled Zetton, after a company trying to publish an Ultra Monster Encyclopedia earlier than everyone else misprinted the description of Alien Zetton with an illustration and the name of Alien Zōffy (宇宙人ゾーフィ Uchūjin Zōfi). Due to home media distribution not existing at the time, television reruns in general being exceeding rare and the lack of other sources, this piece of misinformation was reproduced in various other publications throughout the late 1960s.[3][4]

Relating to the misinformation above, in the publication, his name in Katakana was mistakenly written as "ゾーフィ" instead of the official spelling "ゾフィー". This results in the vowel extension in the name being applied to the "o" instead of the "i".

This version of Zoffy's appearance, alongside being inspired by the illustration in the aforementioned publication, takes coloration cues from Tohl Narita's NEXT (ネクスト Nekusuto), a humanoid being that he drew circa 1992-95.[3] Although unconfirmed, the finished product resembles Narita's other sketching, Ultraman Divine Change (ウルトラマン神変 Urutoraman Shinpen), which he created under Tsuburaya Productions's request in 1989 during the production of Ultraman: Towards the Future. This was intended to be Ultraman Great, but eventually scrapped when Narita requested a 30% copyright fee from it, forcing Tsuburaya to discard it for the Ultra's current design. The "Divine Change" uses the original Ultraman as a design basis, coloring the silver as gold, red as black and finally removing the Color Timer.

The 3DCG model used is altered from Ultraman's, based on a 3D scan of Bin Furuya's proportions. His body patterns combine the elements of his appearances from Ultraman and Ultraman Ace.

Zōffy's face was made through the 3D processing of Ultraman Jack's mask at the time of Return of Ultraman's production, including the imperfections on the mask. This results in him having asymmetrical eyes, and a lightly parted lower right mouth. The black crest fin on his head was restored from Zoffy's first ever live action appearance.[3]

This iteration of Zoffy is more morally grey at best, seeing the loss of one intelligent life out of many being insignificant and not above resorting to eradicate an entire race just to ensure they won't become future threat. Despite this, he's still well-intentioned at heart, willing to abort his plan to destroy Earth and hear Ultraman about why humanity is worth protecting despite dangerously fell into Mefilas' manipulations and went so far merging with Kaminaga in the first place.

The following content contains major spoilers as well as information currently not obtained from officially released footage and publications.

As a result of Extraterrestrial #0 Mefilas sharing the secret to grow into gigantic proportions (Beta System) to the government of Japan, Zōffy appears on Earth, first meeting Ultraman and calling him out for sharing his life force with a human. Seeing how mankind's possession of the technology shared by Mefilas could pose a threat, he sends down Zetton to eliminate the solar system.[7]

When Ultraman sacrificed his life to bring Zetton into the wormhole, Zōffy sensed Ultraman's survival instinct and saved him, finally convinced to leave mankind unharmed. While still wanting Ultraman to answer for his action on their home planet, Zōffy granted the former's wish to resurrect Kaminaga.

Movie Monster Series Zōffy is a soft vinyl figure that is based on his appearance in the movie, and in turn, Tohl Narita's "Ultraman Divine Change" illustration. Unlike previous Ultra Hero Series figures, Zōffy features additional rotating legs, and he only stands 160mm tall, 2mm shorter than the pre-500 UHS figures, while he closely scales with the original Ultra Hero Series line.

A larger version (while closely scales with the Ultra Big Sofubi) of the Movie Monster Series Zōffy is also available 14 days later.

Ultra Action Figure Zōffy is a 15-cm action figure who is a redeco of the same line's Ultraman, and he features 17 points of articulation, complete with poseable 2+2 index-to-pinky fingers. He also features POM plastic pins for his elbow and knee joints.

S.H.Figuarts Zōffy is a collectible action figure that stands 15cm tall as with the rest of the figures from the same line. Like the same line's Ultraman (Ripia), he features no accessories. 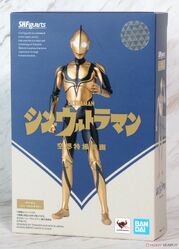 Manufactured by TakaraTomy, MetaColle Zōffy is a palm-sized figure that is molded in both PVC (lower torso and arms) and die-cast metal (body + head). He only features limited articulation on the arms and waist.

"Have you become so fond of humans, Ultraman?"