Ultra Heroes EXPO 2017 Battle Stage
Zetton Alien Baltan[1] (ゼットンバルタン星人 Zetton Barutan Seijin) is a stage show-exclusive Kaiju that appeared in both part 1 and part 2 of Ultraman Festival 2016's stage shows. It is a fusion of Alien Baltan and Zetton.

Having failed to invade the Earth 50 years ago after he first unveiled himself, Alien Baltan launches an invasion again and fights against Ultraman Orb.[2] Soon, this alien summons an army of Alien Baltan and several other past enemies (Ultraman Belial, Dark Lugiel, Greeza and Maga-Zetton) though Orb gains assistance from other Ultra Warriors later onwards.

As the Baltan Army was about to be defeated, an Alien Zetton disguised as the stage show announcer revealed that they had tricked the audience into cheering so that their Maga-Zetton dolls would absorb their light energy. They converted the light energy into Zetton's Kaiju Card, and a remaining Baltan tranformed into their respective Kaiju Card, which then fused to form Zetton Alien Baltan. This combination was too powerful even against the combined effort of Ultraseven, Ultraman Ace, Ultraman Zero, Ultraman Ginga, Ultraman X and Ultraman Orb, but was held off when Ultraman appeared and debuted his new attack, the Colorium Beam. Now joined by Ultraman Tiga and Zoffy, the nine Ultras used a Ultra Charge on Orb, allowing he and Ultraman to fire an ultimate attack, the Double Spacium Beam, which destroyed the fusion monster, leaving only a weakened Alien Baltan.[3] Ultraman Festival 2016 Live Stage Part 1

In the second stage show, Zett recreated Zetton Alien Baltan in his dying breath by summoning one final regular Zetton to fuse with multitudes of Alien Baltan. The fusion was held off by Mebius, Zero, and X while Orb received the light of the other Ultra Warriors, as well as the audience's, allowing him to use a superpowered Sparion Beam to defeat the monster.[4] Ultraman Festival 2016 Live Stage Part 2

While struggling against Red King, Golza, and Bemstar, Jugglus Juggler wished for the power of darkness, causing the Dark Ring to return to him. He used it transform into Zetton Alien Baltan and beat the monsters, only to be attacked by Magatano-Orochi, who quickly defeated him and reverted him to his Majin form. Ultra Heroes EXPO 2017 Battle Stage

Zetton Alien Baltan as it appeared in costume[5] 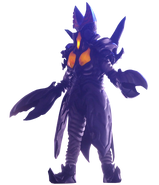 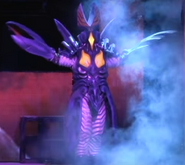