Alien Chibull created Zero One with the directive of killing Dan Moroboshi. The evil alien sent Zero One out at night in order to intercept the Ultra Guard's night patrol to find Dan. In her first attempt she found Soga and Furuhashi while they were driving down a road. She asked if either of the was Dan, and Furuhashi jokingly said he was Dan. A handshake later and he was shocked and injured, while Zero One ran away. Later she was scolded by her master on her failure. When Dan and another UG member were cornered in a store by her master and herself, the two were caught off guard when Dan knocked Soga out and transformed into Ultraseven. After a short chase, Seven managed to shoot Zero One with his Emerium Beam, turning her into a statue. She then toppled over and smashed into pieces, dying in the process. Her death forced her master to transform.

Zero One was rebooted in this series as Android One Zero, the secondary antagonist of Ultraman Ginga S in the series' first half, serving under her master, Alien Chibull Exceller. However, after she was dumped by Exceller, she found a new purpose in her life as Mana, allying with her former enemies, Hikaru Raido, Sho and UPG. In the finale, she sacrificed herself to sabotage Vict Lugiel for Ultraman Ginga Strium and Ultraman Victory to kill him, but her imprints were retained in her Victorium necklace, allowing Tomoya Ichijouji to rebuild her. 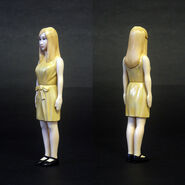