Zeppandon (ゼッパンドン, Zeppandon) is a Kaiju that appears in Ultraman Orb. It is a combination of Zetton, Pandon, and Maga-Orochi's tail, the latter is an optional part.

While Gai Kurenai was walking through the forest, mourning of Naomi's injury and thinking back to Natasha's death, his arch nemesis, Jugglus Juggler made his appearance, and after a brief conversation, the two juked it out in hand-to-hand combat. Jugglus was quick to gain the upper hand, downing Gai with a barrage of energy blasts, then used his Snake-heart Sword to summon a wormhole in the sky above. From the dark portal emerged the tail of Maga-Orochi, which had been severed by Orb in his Thunder Breastar form. Jugglus then used the Kaiju Cards of Zetton and Pandon with his Dark Ring and fused them, himself, and Maga-Orochi's tail together in the wormhole to form the monstrosity, Zeppandon.

Immediately, Gai transformed into Ultraman Orb Spacium Zeperion to fight the monster. While he tried as hard as he could, Orb couldn't keep up with Zeppandon. Even though he was fast enough to avoid the monster's fire streams, Zeppandon easily repelled the Ultra hero's attacks, catching (and devouring) his Sperion Light Ring in his teeth, and blocking his Sperion Ray with the Zeppandon Shield whilst Juggler taunted his rival's efforts.

Changing tactics, Orb switched to his Hurricane Slash form and brought out his Orb Slugger Lance. Both giants were evenly matched in speed due to their teleportation abilities until Orb finally managed to land a hit on Zeppandon by striking him in the chest with the lance and tried to destroy him with his Big Bang Thrust. The combined monster was quick to counter this, however, heating up the weapon to force Orb off before absorbing the hero's lance into his body. As Orb watched on in shock, Zeppandon struck the Ultra with his Zeppandon Lightning, causing the Ultra's Color Timer to start to blink as Jugglus taunted him some more.

Orb then switched forms again, this time into his Burnmite form to turn up the heat. He managed to even up the combat score with Zeppandon, but the latter turned the tables on him and sent Orb flying with a powerful kick. After enduring a brutal fire bullet assault, the Ultra tried to wrap up the fight by using his Stobium Dynamite, but while it proved too much for Orb, as he was forced back into his human form, Zeppandon was still standing and unfazed by the attack, and so, he lived to fight another day.

In the next episode, Jugglus Juggler used his Dark Ring to turn into Zeppandon again and taunted Gai to fight him again. The latter rushed to the scene and transformed into Ultraman Orb again, this time in his Thunder Breastar form. Try as he could, however, the Ultra could not land in dent in the combined monster's rocky layer while the latter was once again beating Orb. He did succeed on lifting Zeppandon, but the latter used his fire bullets on him, forcing him to drop and release him. Getting frustrated from the monster's assault, Orb picked a transmission tower and used it as a weapon, but not even that proved efficient enough to pull through. After enduring another beat-down, Orb tried to fire a decisive strike with his Zedcium Ray, but the monster blocked the attack with his shield and fired back at him with his Head Beams.

To make matters worse, the VTL's fighters were activated to attack the destructive Ultraman, much to Juggler's delight as he added on to the onslaught with his energy attacks. However, the Ultra (and Gai) retained control of his rationality and shielded the entire SSP team with his body. After Naomi sang the song Gai usually played on his Orbnica, Gai was reminded to trust the extent of his own powers. The blank card given to Gai earlier by Natasha changed into the Orb Origin card, allowing Gai to gain access to his original form. Scanning the card into the Orb Ring to tap into his true power, the Orb Calibur revealed itself in a gleam of bright light from the tail of Zeppandon. Spinning the roulette and pressing the button on the handle, Gai transformed into his original, true form for the first time in 108 years in a mix of red, blue, yellow and green light.

Threatened by the knowledge of Orb Origin form's power, Jugglus controlled Zeppandon to fire at him once more, but Orb walked past them and slashed at the monster with his sword. Orb Origin then activated the earth power of the Orb Calibur with the move 'Orb Ground Calibur', unleashing a yellow shockwave that smashed through the energy shields of the monster from two directions and dealing critical damage to Zeppandon.

Jugglus newest creation finally met its end as Gai scanned the Orb Calibur into his Orb Ring and summoned the combined power of all 4 elements (Fire, Water, Earth, and Wind). Orb Origin conjured a big ring of iridescent light in the sky and launched an immense beam of energy using his Orb Supreme Calibur attack. The very same beam that destroyed Maga-Zetton a century ago blasted Zeppandon head-on and annihilated the monstrosity in an epic explosion. Jugglus Juggler ended up being critically injured and seemingly losing his Dark Ring for good, leaving him extremely furious.

Ultraman Orb The Movie: Lend me the Power of Bonds!

"The only one allowed to defeat Orb is me! I won't let anybody else do it."

Zeppandon reappeared in the film where Jugglus Juggler transformed into in order to help out Ultraman Orb fight off Deavorick, Alien Temperor, and Alien Hipporito. Soon afterwards, he immediately launched his fire bullets and head blasts at the three then afterwards, rebounded attacks from the aliens. but later on, he ran out of fire and found himself at the mercy of Temperor and Hipporito as they beat them up and defeated him with their flames and lasers respectively, forcing Zeppandon to revert back to Jugglus Juggler's human form.

In his Demon Form, Juggler scans the cards of Zetton and Pandon before raising the Dark Ring upwards. His body changes into a ball of energy that fuses with Maga-Orochi's tail, then a beam of red light strikes the ground, unveiling Zeppandon.

Juggler in his human form scans Zetton and Pandon's cards, creating projections of said Kaiju as the screen facing the respective angle of their faces. Afterwards, he raises the Dark Ring up which causes his body to transform into Majin Form with his and the component Kaiju's bodies being covered in a luminous silhouette before merging. This causes his silhouette to evaporate and reveal Zeppandon. During the rising sequence, Zeppandon appears from a purple light and the background bursts as it approaches further to the screen.

Juggler transforms into a silhouette of his Demon form

Juggler's silhouette evaporates to reveal him as Zeppandon

A black and red background with the purple light

Zeppandon rises from within the red background, followed with flashes

Fire Destruction Ray
Add a photo to this gallery

Ultraman Orb The Movie: Lend me the Power of Bonds! 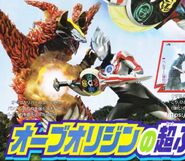 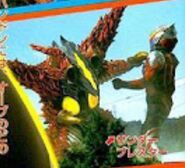 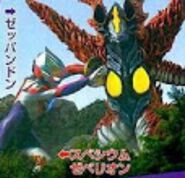 Retrieved from "https://ultra.fandom.com/wiki/Zeppandon?oldid=445424"
Community content is available under CC-BY-SA unless otherwise noted.