Ultraman Dyna episode 46 "The Power of Thinking of You"
The Zenekindarl people (ゼネキンダール人 Zenekindāru Jin) are race of ancient aliens that appeared in Ultraman Dyna.

Once a race that ruled Earth in an untold age, the Zenekindarl eventually died out by unknown means, leaving behind only their geoglyphs in the Andes and a Clone-Creating Device. Centuries later during the time of Dyna, it was found by Dr. Akizuki, an archeologist who specialized in geoglyphs. The professor returned home with inadvertently creating three clones of the ancient race, who held him and his wife and daughter as prisoners while they prepared their attempts to wipe out mankind.

One day, a young boy stumblesd across three Zenekindarl agents using some sort of pole spawning lightning. Across the planet two fighters were sent into action to investigate a strange cloud front, but they were shot down by the Kaiju weapon Dexador before they could do anything. After some research, that pointed out ancient geoglyph that resembled the monster, they received a call from the same boy that spied upon the Zenekindarl people. Meanwhile, one of the members of Super GUTS, Kiriya, tried to find out the secret of Dexador's geoglph and went to Dr. Akizuki's house. There he met the scientist and his family. After his failure to glean any relevant information, he followed a suspicion and snuck back into their house, finding the family locked in a room when they were being telepathically inflected with pain by the three Zenekindarl people with the Super GUTS member falling into their clutches.

After a strange comet fall into Matsumoto City, various past enemies of Super GUTS and GUTS began on a roaming spree, scaring the citizens. Three Super GUTS officers on a patrol Kohda and Kariya witnessed a Digon walking towards them, though Nakajima see it as a Zenekindarl people instead. As each take out their GUTS Blaster and fired, the fish-like being phased through all of their attacks and vanished. The Power of Thinking of You 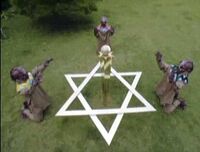 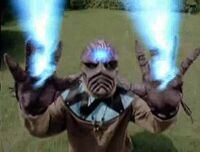 Telepathy Beam
Add a photo to this gallery 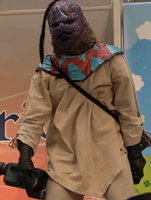 Zenekindarl Person in a stage show
Add a photo to this gallery
Retrieved from "https://ultra.fandom.com/wiki/Zenekindarl_people?oldid=511368"
Community content is available under CC-BY-SA unless otherwise noted.