Hideyoshi Iwata (Actor)
Shintaro Asanuma (Voice)
Zena (ゼナ, Zena) also known as Sena, is an Alien Shadow (シャドー星人 Shadō Seijin) and one of the characters of Ultraman Geed. Originally the drillmaster to his kind's invasion force, Belial's rampage lands him on a job as an AIB agent and eventually redeemed him from his past actions. For his human identity he uses the name Sena Hideki (日出樹 瀬名 Hideki Sena).

His name is Greek for "Sons of Zeus", which can also be interpreted as welcoming or hospitable.

Zena presented himself as a stoic and somewhat strict senior for his junior Moa. He always patient in dealing Moa's antics and carelessness which at times putting their mission in jeopardy. However, Ultraman Zero, upon learning his nature as an Alien Shadow, suspected that this may actually a ruse to hide his true color as the agent of his race's invasive force who intended to invade Earth just like what they did onto other planets. While this later confirmed true through the fallout between him and his disciple Kuruto, Zena has long turned over a new leaf, having humbled by the deaths of his former students and later, inspired by bravery and kindness Moa displayed when he saw her selflessly tending an injured alien, at which he realized establishing peaceful coexistence with other race is better than conquering them, and thus dedicated himself to continue his duty as AIB agent to ensure peace in Earth and entire universe despite his dark beginning.

Zena was once a member of the Alien Shadow invasion force and trained a group of Gabra Cano child soldiers, among them being Kuruto. As a result of Ultraman Belial's attack on Planet Shadow and Crisis Impact, Zena was separated from his kin after his home planet became uninhabitable. Alongside other alien victims of Crisis Impact, Zena joined the AIB and initially planned to restore Planet Shadow's glory until the deaths of his former students allows him to move on and coexist with other races instead of conquering them. He also came in possession with the Zegun Retriever Device and planned to dispose it or use the monster in times of need.

Sometime ago while investigating a trespassing Alien Zelan, he was surprised of young Moa Aizaki tending the alien and not showing signs of discomfort to its appearance. Interested with her bravery, he took the young woman under his wing and trained her as a proper agent. Despite Moa's antics and carelessness, he never loses his patience and instead view her as an important member due to her presence laid a huge impact to the entire organization.

At the advent of Ultraman Geed's appearance, Zena and the AIB would investigate the Ultra himself with members of the organization had mixed receptions of Geed either as a hero or a villain. Seeing Kei Fukuide's involvement in recent strings of monster attacks, Zena and Moa found that he is an Alien Sturm and sought the help of Ultraman Zero to investigate Belial's coordinate.

Zena met his former student Kuruto and captured while the latter try to reawaken Zegun and invade Earth to restore the glory of Planet Shadow. With Moa absorbed from a nearby portal, he discovered Riku's identity as Geed to search for both his partner and student. Discovering Kuruto, Zena immediately plead him to cease the invasion and offered his own life but his former student found himself beyond redemption, forcing both Geed and Zero to end his life. This eventually left Zena with a damaged part of Zegun Retriever Device as a memento of his former students.

After Belial's defeat as Chimeraberus, Zena continued to be part of the AIB to ensure peace in Earth and perhaps the universe, assisting Riku and his friends when necessary. When Riku went to Okinawa to find Kei, Zena took Laiha along with him in search for Riku. After Kei's final battle, he is surprised to see Belial's revival and in the possession of Arie. Zena and his agents also pursed Kei as he leaped into the sea.

Zena was also revealed that he and his agents is responsible for Zegun's repair and he feels that Geed and Zero is not enough to defeat Belial Atrocious. After devising a plan with Riku and Leito (Zero) to trap Belial into another dimension, they put their plan into motion. However, Belial sees through their plan and destroyed the newly repaired Zegun with his Atros Burst, cancelling Zena's merger with Zegun. After the battle between Geed and Belial was over, Zena felt relieved. He later celebrated the victory against Belial with Riku and his friends.

Zena and Moa sortie to investigate a crashing meteor, who turns out to be Jugglus Juggler. Galactron MK2 appears and the AIB agents along with Juggler watch Geed fight the robot, but it disappeared. Back at the AIB base, Moa and Zena tell the gang about what happened, when they were interrupted by Juggler, who sneaked up behind them, and told them to meet up at the underground base where he explained his reasons for coming to Earth - to find the red steel. They went went to Okinawa in search of it, spotting Leito by chance and bringing him along. Meeting Airu Higa and being told of the legends, the gang retreated when Galactron MK2 reappeared while learning that Airu is an alien. Visiting an alien city, the gang fought against the aliens when Gai Kurenai arrived. While getting more information from Alien Jaki Arlon, Zena ordered Moa to pay him for the intel but she seemed to have lost her purse, so he got Leito to pay for it instead. Laiha demanded the Jaki to reveal everything by putting her sword's tip at him when the alien kept asking for payment after speaking each sentence. When Riku was depressed and refused to transform to fight against the Galactron Army after the previous battle, Zena and his allies persuaded Riku to believe in himself while defending the young boy from the Valis Raiders. After Riku joined forces with his allies as Ultimate Final and destroying the last Galactrons, Zena left the matters to the hands of the Ultras. 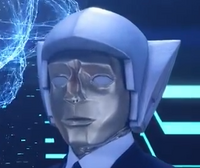 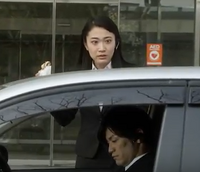 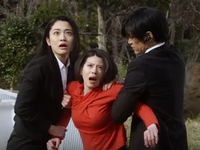 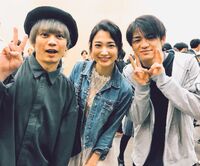