Zegun's motif is a mixture of aquatic creatures, such as: sharks, killer whales, and crustaceans.

Through years of research, the Alien Shadows managed to construct this bioweapon[2] that was to be used to invade the Earth in order to take it over so that they can replace their planet, which had been deserted after the devastation caused during the war with Belial. The means to summon and control it was in the hands of the AIB Agent Zenna who was on Earth, who intended to destroy it eventually, but decided to leave in case of a worse case scenario involving Belial and locked the device used to summon him in a pocket dimension.

Much later, Zenna's student named Kuruto made use of this creature, entering it to control it directly, but had to face off against Geed and Zero. Their battle led to a beam clash with Zegun's Zegunt Beam going against Geed Magnificent's Big Bustaway, their energies destabilized each others' beams and resulted in a dimensional portal that begun to suck everything in, even Moa Aizaki who was nearby. It was not until Ultraman Zero Beyond interfered that their beam clash ended, with each beam being sent right back to their user. Thus, Zegun was sent to another dimension by its own beam. Shadows of Shadows Afterwards, a space-time distortion appeared in the combat zone and RE.M. revealed that the people and things that Zegun were actually in an area filled with forest shrouded by an interference shroud.

It didn't take too long, however, before Zegun's energy signature was detected again and Kuruto managed to summon Zegun back to the Earth, despite Zenna's warning that using the kaiju's power would cost the life of the Alien Shadow, to reign destruction upon it once more by firing its Claw Lightning before he was once again confronted by Geed and Zero. Their rematch started when the two Ultras dodged the lightning and then striking at the Kaiju with their Geed Claw and Zero Sluggers respectively. The two Ultras then held the upper hand with their agility and teamwork but Zegun fought back and ended up hurting Zero's wrist and electrocuting Geed before attempting and failing to send Geed to another dimension again.

Geed then transformed into his Magnificent form and used his Arrayzing Geed Barrier to push the Zegunt Beam back, but it wasn't enough so Zero transformed into his Beyond form and summoned a similar barrier to push the remaining the energies back to Zegun, and eventually, the two Ultras pushed the barriers so close together, that they encapsulated the Kaiju in a sphere as he still fired his signature beam all while Kuruto kept saying "Kam tatahl Shadow" and after a short while, Zegun finally met his end as well as Kuruto as they exploded in a fiery ball and the broken device was retrieved by Zenna.

"Trying to trap me outside this dimension? It won't be that simple!"

―Belial Atrocious before destroying Zegun with his Atros Burst

During Belial Atrocious' raid on Earth, Zegun was reproduced and revived by Zenna and the AIB to aid Geed and Zero in their battle. They devised a plan to trap Belial Atrocious in another dimension by allowing Zegun to engage in a beam clash with Geed. However, Belial saw through the plan and destroyed Zegun in one shot with his Atros Burst.

Zegun was part of a monster auction, having been summoned by Alien Magma to demonstrate its power by making it fight the mother of a Zandrias baby and held the advantage despite the mother's efforts. Upon Hellberus' arrival however, Zegun was destroyed by the Kaiju when it stabbed Zegun in the chest with its tail. Buddy Go! 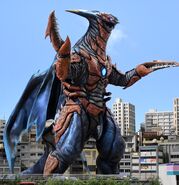 Zegun hit by its own beam