"I can't make Kaiju anymore..."
"I think you misunderstand me. I'm fine with you becoming a Kaiju yourself. Instance...Abreaction!"

―Alexis turning Akane into a kaiju

Seeing that Akane refused to create any more kaiju, Alexis decided to instead turn her into one, saying that someone who makes Kaiju is a Kaiju themselves. Within it, Akane was haunted by her grief and the victims of her past kaiju. As Zegga rampaged through town, Gridman/Yuta asked Anti to deal with it while he regrouped his friends for the final battle. After a short struggle between Zegga and Gridknight, Anti opened up its mouth and jumped into the 'face' inside, where he managed to pull Akane out of it, though he was impaled by Alexis immediately after. Zegga sat lifeless and then rolled around aimlessly, before it was erased by Gridman's Grid Fixer Beam. Awakening (Finale)

Electrical Shock
Add a photo to this gallery 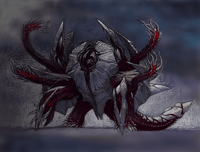 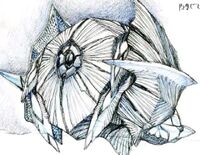 Retrieved from "https://ultra.fandom.com/wiki/Zegga?oldid=515063"
Community content is available under CC-BY-SA unless otherwise noted.