Redman episode 48
Zaurs (ザウルス Zaurusu) was originally one of the few monsters to appear in Fight! Mighty Jack and the only one to appear in another series, Redman.

A dinosaur from the Loch Ness swallowed 3 hydrogen bombs. Zaurs is friends with a girl Alisa.

Zaurs was one of two non-Ultra Kaiju to appear in Redman, along with Darkron.

Zaurs first appeared in episode 44, where he, at first, was just wandering around, minding his own business. When he saw Redman, however, he tried to avoid a fight, but the alien teleported behind him and a fight began. The two warriors were evenly matched with each other as they kept grappling and throwing each other to the ground but eventually, Zaurs lost by a Red Kick to the head.

Zaurs later appeared in episode 45, where he fought Kingstron at first, with him having the losing edge at first. When Redman showed up and broke up the fight, however, the two monsters eventually decided to team up. After Kingstron was defeated by the alien, he killed Zaurs with a hard judo throw.

In episode 47, Zaurs teleported behind Gronken but before Stegon, indicating that the three monsters decided to work together to defeat Redman but preferred to do it one at a time. After Gronken was defeated, Zaurs took on the alien hero only to ended up getting aggressively chopped, kicked, and thrown onto the ground, just like Gronken. Zaurs was eventually killed by a judo throw to the ground after a grapple to the neck.

Zaurs' final appearance on the show was in episode 48, where he fought Redman again, this time all by himself. In a seemingly even match, Zaurs was actually thrown about and chopped all around by the alien hero. Even though Zaurs managed to fight back, in the end he was killed by a judo throw to the ground on his back. 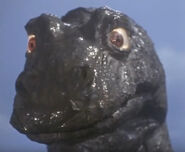 Zaurs as it appears in the Redman Comic.

Zaurs on land.
Community content is available under CC-BY-SA unless otherwise noted.
Advertisement