Zatan Silver was the prime invasion weapon of Alien Zatan crafted to withstand Ultras. Its first attack upon the planet was in relatively small city, ripping through the entire place and killing thousands without mercy from its masters. It was eventually brought back in, being kept in case the Zatan's infiltration of UGM were to fail.

Inevitably, the mission did fail and so Zatan Silver was unleashed by the last Zatan alien, intending to bring the fury of its race upon humanity. When UGM’s weapons failed to even get the creature’s attentions, Ultraman 80 was called forth. The red and silver giant tried his all, but not his strongest attack could penetrate the robot’s thick armor. As his energy ran low, 80 began to repeatedly attack the same area with a flurry of kicks until he damaged it and exposed the inner workings. As the creature roared aloud, the hero released an ice mist. The mist drifted into the open wound and began to freeze the cybernetic kaiju. Soon the monster fell to the ground and exploded, yet another invasion scheme foiled.

Explosive Mist
Add a photo to this gallery 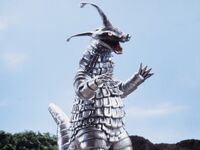 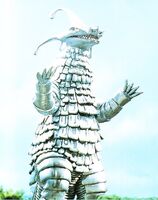 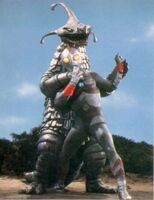 Retrieved from "https://ultra.fandom.com/wiki/Zatan_Silver?oldid=519235"
Community content is available under CC-BY-SA unless otherwise noted.