After attacking a children's theme park the day previous, Zaragas appeared in a bright blinding flash and in red smoke that appeared nearby. Zaragas then attacked the city he appeared in only for the Science Patrol to attack him back. Protected by Zaragas's blinding flashes by their helmet visors, the Science Patrol fired on the monster, apparently wounding him. Suddenly, Zaragas shed some of his armor plates and his power was restored, with his anger growing along with it.

The military then informed the Science Patrol to be called off, informing them that every attack that hits Zaragas causes the monster to adapt and become more stronger and ferocious. However, the Science Patrol was called to rescue some children who were trapped inside of the theme park. Shin Hayata tried to protect the children, but Zaragas discovered and blinded them with his flashes. Unable to watch Zaragas's rampage go on, Arashi of the Science Patrol shot at Zaragas with a new weapon. But like before, Zaragas simply adapted and continued his rampage.

With Hayata now blinded and Arashi now no longer a Science Patrol member, Arashi stole a VTOL jet to attack Zaragas himself, only to be knocked unconscious by Zaragas. Unwilling to listen to his friend die, Hayata transformed into Ultraman, rescuing Arashi before Zaragas could harm him. Once Arashi escaped, Ultraman fought back against Zaragas and had the upper hand at first, until the flashes soon blinded Ultraman, giving Zaragas the advantage. However, thanks to the intervention by Arashi, Ultraman blasted Zaragas with his Spacium Beam, killing the monster. Don't Shoot, Arashi!

Shortly after landing on the planet Dent, The ZAP SPACY crew was ambushed by an incoming meteorite that revealed the monster, Zaragas. After some quick retaliation by the ZAP SPACY, Rei quickly summoned his Gomora to do battle. The fight between Gomora and Zaragas was evenly matched, but after the ZAP SPACY discovered Zaragas's vulnerability when he absorbs an attack, they use this weakness to their advantage. Once exploited, Zaragas was quickly destroyed by Gomora's Super Oscillatory Wave.

Zaragas appears in Ultraman Ginga as a Spark Doll, and later fights Ultraman Ginga and Red King. He can now adapt into a new form equipped with long needle or spearlike objects on his chest and back. His host is Shingo Kuwabara, an architecture designer. Together with Seiichiro Isurugi, Misuzu's father and Tomomi Kuroki, they try to change the Furuboshi High School as a composite type of resort. He stole the Ginga Spark and give it to Alien Nackle, so Kuwabara can get out from the school, only to be Darklived into Zaragas.

It is likely that Zaragas returned to his home in his original form after Ultraman Ginga defeated Dark Lugiel.

Zaragas returned in this series as a Spark Doll under ownership of the Gua Army.

Used by Gina Spectre, it was materialized to life by her to take her place in fighting Asuna while she left and checked on Tsurugi Demaaga. After gaining Cyber Gomora's approval, Asuna Realizes it to life, forming a mental links as it battles Zaragas and defeated it with Cyber Super Oscillatory Wave. It was regressed back to a Spark Doll and kept under Xio's custody. End of the Rainbow

In the final episode of Ultraman X, after Greeza destroyed the Xio base, Zaragas' Spark Doll was absorbed by Greeza. After speaking out to Gomora and striking Greeza right in the center of his chest, Zaragas, along with all of the other Spark Dolls, traveled to X and united with him. Zaragas' power was used to help form the Hybrid Armor and power up the Ultimate Xanadium to defeat Greeza once and for all. Zaragas, along with the numerous other Cyber Cards and Spark Dolls, then appeared and thanked Daichi as he thanked them. The Rainbow Land

As recalled in Ultraman Taiga's past, a modified variant called Re-Zaragas (改造ザラガス Kaizō Zaragasu),[2] whose body was outfitted with multiple autocannons, was one of the members of Gua Army's Mechanized Monster Army under Imbiza's leadership. Alongside Re-Alien Iyros and Re-Beacon, the three were commanded by Imbiza to attack Andro Ares through salvo firing, but the Andro Super Warrior dodged through the attacks and used his Cosmo Magnum: Twin Edge Mode to slice through all three cyborg monsters. For Whom Is That Fist For - Part 2 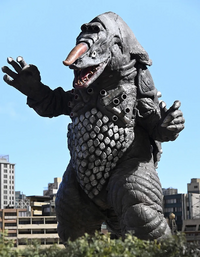 Zaragas was a monster that was originally sleeping underground, being monitored by GUTS-Select. However, the monster was awoken after sensing the vibrations given off by Darrgon, who was furious from not being able to gain Yuna Shizuma's love. Zaragas then began to wreak havoc upon the city before Kengo Manaka transformed into Ultraman Trigger to confront it. Both were evenly matched until Trigger fired a Hand Slash on Zaragas, who shedded its shell and blinded Trigger with its flashes before pummeling the hero.

Akito Hijiri shot at the monster, distracting it. But this also caused Zaragas to evolve into its spiked form, shooting energy beams from its spikes in all directions. Akito then told Himari Nanase to spray Zaragas with the liquid nitrogen stored inside the GUTS Falcon, hoping to prevent Zaragas from further evolving. After being sprayed by the liquid nitrogen, Zaragas was forced to revert back to its second form. Enraged, it tried to blind Trigger, who had changed into Power Type. The Ultra managed to avoid being blinded again after doing a tuck-and-roll, before pummeling Zaragas with his increased strength. However, an uppercut caused Zaragas almost fall on Yuna and Akito.

In a surprising turn of events, Darrgon saved the two by catching Zaragas, holding the monster with just one finger. The Dark Giant tossed the monster back at Trigger, who used Deracium Beam Torrent on it, sending Zaragas flying across the city and into a building, before the transforming monster exploded, ending its reign. Wavering Heart

Zaragas became a Spark Doll in the conclusion of the Dark Spark War due to the Dark Spark's powers. His Spark Doll was kept in Dark Lugiel's collection, and was given to Alien Nackle to give to evil-hearted people to seed chaos. After Dark Lugiel's defeat, Zaragas' Spark Doll is likely to have reverted back to its original form and depart Earth to return home.

Zaragas reappeared in the puzzle role-playing game for mobile devices, Ultraman Galaxy as a UC (Uncommon) card that you can unlock him in one of the levels in the game with a high chance of getting Zaragas.

Zaragas briefly appeared as one of the anatomical drawings of dinosaurs along with Telesdon and Kemular.

In the short film, Zaragas blinds a boy's eyes with his flashes. The boy's father gives him sunglasses in an attempt to save his eyes from Zaragas's blinding attack. After they shout "Ultraman!", Ultraman rises and attacks Zaragas. New Century Ultraman Legend

In 2013, Zaragas was released as part of the Ultra Kaiju 500 Series. He has 4 points of articulation and looks greatly accurate to the shows. He is #4 in the series and stands at 5 in. tall.