Return of Ultraman episode 23 "Dark Monster Spit out the Stars!"

New Ultraman Retsuden episode 27 "Return of the Spark Dolls Theater"
Zanika (ザニカ, Zanika)[1] is a crab-like monster from a planet in the constellation of Cancer, that appeared in the TV series, Return of Ultraman. He appeared in episode 23.

Zanika was an alien who was both a victim and survivor of Vacuumon's hunger. After his planet was eaten by the entity, Zanika fled to Earth to hide from Vacuumon, only to be discovered in the woods by Hideki Go. MAT quickly arrived and attacked Zanika, cutting off one of his arms, but MAT was forced into retreat as their weapons couldn't do much against the monster. All the while, Zanika was trying to fight back, much less trying to escape their onslaught. MAT soon attacked again, this time with flamethrowers, but to no effect ether. The creature still refused to fight back, merely sitting down. Zanika began lashing out at his surroundings, looking for food, only to provoke attack because of the pain he felt from Vaccumon eating the stars and planets.

Having enough of their unprovoked attacks, Zanika finally defended himself, knocking two of their crafts down, forcing Ultraman Jack to come out to fight. Zanika was able to hold off Jack for a while, but that quickly changed once Jack used the Ultra Bracelet to cut off Zanika's Pincers. Zanika then begged for mercy, alerting Jack of the incoming Vaccumon, giving him enough time to fly into space and mutilate Vaccumon’s innards with the Ultra Bracelet, killing the cosmic terror. With Vacuumon’s defeat, all the planets it had ingested were released, including Zanika’s home. Jack returned and told this fact to Zanika. Happy, Zanika thanked Jack and took off into space to return to his home. 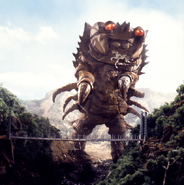 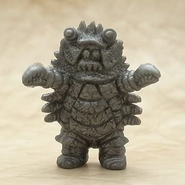