None
Zangani (サンガーニ Sangāni) is a Kaiju that appeared in the series, Mirrorman.

On Isi Island the Invaders were kidnapping and killing villagers or experimentation. Three of these villagers had their corpses possessed, altering them significantly. The three were hit by a beam from a flying saucer that turned them into the monster Zangani. The SGM used the Jumbo Phoenix to fire upon the monster to no avail. During the battle the Invaders revealed a missile silo hidden in the island's volcano that were planned to fire at Tokyo while Zangani distracted SGM. Phoenix 1 went after the silo while Phoenix 2 and 3 focused on Zangani. The silo had to retreat and the Invaders sent out their flying saucer to the fight. Kyotaro transformed into Mirrorman using a puddle of cave water, Zangani quickly noticed and aimed his flames at the hero. A Slicer H and V were used to sever the monster's wings, stunning it so Mirrorman could charge in and assault him. Zangani then had his whips severed via a pair of Slicer Vs as the missile silo was erected from the volcano once more. Mirrorman used a Horizontal Cut to decapitate Zangani and Mirrorman quickly destroyed the missile silo before the missiles could launch. 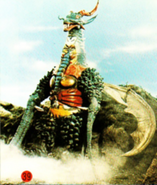