Ultraman 80 episode 4 "For the Love of the Sky"

A creature from space, Zandrias came to Earth in a meteorite. He crash-landed in a remote area of Japan, and his signal was still picked up by UGM's sensors. However, before anything could be done against the kaiju, it burrowed underground and began moving beneath the surface.

UGM quickly mobilized to face the first Kaiju to arrive on Earth since Ultraman Leo's time and flew off to locate the beast. The monster finally emerged from below ground and began to attack the city with powerful winds from its wings, before landing and beginning to tear the town apart on his own. UGM arrived to assault the terrible behemoth but failed to do any harm to it. Yamato discovered a father and son whose tension may have in fact provided the negative energy for Zandrias' creation.

Suddenly, a shocking turn of events occurred, there wasn't one, but two Zandrias! The first one the mother, the other a child. However, there seemed to be tension between them as while teaching her son to fly, the elder Zandrias got aggressive with her son and accidentally knocked the younger Kaiju through a building.

A juvenile Zandrias reappeared in episode 10 of Ultraman Geed, making its first appearance in 37 years. The male Zandrias was first seen wandering through the forest and a specialist, an Alien Zobetai named Satoko was hired by the AIB to make contact with him, but he was too far away for her to reach him. Afterwards, Zandrias encased himself in a crystal which then buried itself a hundred meters from its position underground.

Zandrias later reappeared in a valley, and Satoko arrived on the scene with Moa Aizaki to try and contact him again. Irritated by Satoko's attempts, Zandrias went on a rampage. Using gusts of wind from his wings, Zandrias sent Satoko and Aizaki flying until they were saved by Riku Asakura, who transformed into Ultraman Geed, giving away his true identity to them in the process. Geed then decided to fight the kaiju, but the latter proved to be a very mischievous opponent, preferring to play around with his opponents and moving around the battlefield very fast. When Zandrias tried to fly away, Geed transformed into his Acro Smasher form and chased after him in the sky, but he crashed into the ground after he was blinded by a dust cloud. Geed then tried his Smash Moon Healing on Zandrias, but it didn't even affect the kaiju, who then knocked the Ultra down and proceeded to roughhouse him, making his color timer begin to blink, until Ultraman Zero showed up and kicked him off of Geed.

With Zandrias dazed, Satoko finally managed to contact the Kaiju. Her powers revealed that Zandrias was acting up because he couldn't go back to space and was feeling lonely. Moa persuaded the Ultras to calm him down and not hurt him. They agreed, then stopped him from charging at them and gently pushed him down. As a result, Zandrias started to cry, which was ear shattering to even the Ultras. Zandrias began to think about his childhood friend, a female Zandrias that he had feelings for, and was worried that she didn't like him. After Zero told Zandrias to get over it, the Kaiju attacked him with his eye beams, which he dodged. Moa then gave an inspiring speech towards the kaiju, and Zero transformed into his Beyond Form. Zandrias tried to use his fire breath on Zero, but Zero deflected it with his Quattro Sluggers. As the weapons reached Zero, they formed a rudimentary megaphone which Zero then used to create a blast of wind that carried Zandrias into the atmosphere on a piece of rock, allowing the Kaiju to go home.

While exiting Earth's atmosphere and flying into space, Zandrias met his childhood friend after she emerged from a crystal. The two of them were very happy to see each other again, and they came towards each other and kissed, making both of them very happy.

According to Alien Rivers Kawazu, Zandrias were overhunted and on the brink of extinction. Kawazu tried to return a Baby Zandrias (ベビーサンドリアス Bebī Zandoriasu) back to its mother, but they were met by opposition from the Villain Guild. Despite escaping from an Alien Ckalutch and Cicada Human, an Alien Magma managed to take off with the baby and teleported to a nearby building. The alien used its cries to attract the attention of the Young Mother Zandrias (ヤングマザーザンドリアス Yangu Mazā Zandoriasu) who proceeded to fight Zegun, the monster Magma summoned for an auction. The mother tried desperately to fight Zegun, but was overpowered by the kaiju, and things got worse when Hellberus arrived and took Zegun's place by killing it with one stab. Hellberus brutally overpowered the mother as she was trying to protect her baby until Hiroyuki Kudo transformed into Ultraman Taiga for the first time, returned the baby to her mother and, after a long match, defeated Hellberus. After mother and child were reunited, Kawazu flew them back to their home planet via his spaceship's tractor beam. Buddy Go!

Zandrias and Noiseler had suddenly appeared outside of Ayaka City. Ultrawoman Grigio arrived to protect her hometown while her brothers were away to deal with the Devil Splinters. After struggling slightly, Grigio fought well against the two Kaiju, with her firing her Grigio Shot at them, causing the two to flee in fear. The Appearance

A Baby Zandrias named Kedamya (ケダミャー Kedamyā) appears in episode 7 of the series, acting as the parrot of Alien Barossa IV. As Barossa IV, like Barossa I, was incapable of speaking human languages, he enlisted Kedamya's assistance as an interpreter, having the small monster sit atop his shoulder to translate for him. Kedamya at least helped its partner in stealing Haruki's Ultra Medals during their trip in a dimensional portal created by Bullton. After Barossa IV's defeat, Kedamya flew away, but not before defecating on Ignis' forehead. Inter Universe 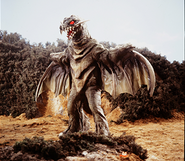 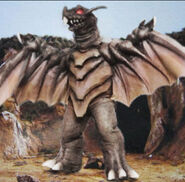 Figure of Zandrias, created by Popy. 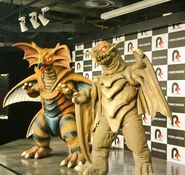 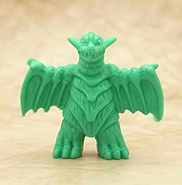 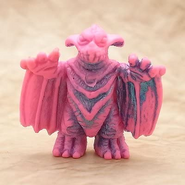