The first member of this race debuted in this series as a space rōnin who wanders around the universe in hopes of fighting against formidable opponent. After facing against various aliens, Zamsher went to Earth in hopes of challenging Hunter Knight Tsurugi but a series of events on said planet and his encounter with Ultraman Mebius changed his initial impression of the rookie Ultra Warrior, departing to space in hopes of becoming stronger.

Sometime later, Zamsher's Hoshikirimaru was fixed by Ultraman King as he met two other aliens that befriended the GUYS members during their time on Earth. After facing against Alien Ateria, they return to Earth to assist GUYS members in facing against Alien Empera. Zamsher loses his life when fighting alongside Ultraman Hikari, leaving his Hoshikirimaru for the blue Ultra to use. 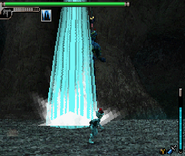 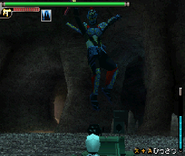 Extraordinary Jumper
Add a photo to this gallery
Nodachi Zamsher

Nagina Zamsher (ナギナザムシャー Nagina Zamushā) is a calm and passionate hunter who is always reliable at times of emergency. He as well perform tasks that were given by Yumi Zamsher.

In addition to the original Zamsher, three other members of this group appeared with different armor and weapons.

Retrieved from "https://ultra.fandom.com/wiki/Zamsher_group?oldid=462063"
Community content is available under CC-BY-SA unless otherwise noted.