Ultraman: The Ultimate Hero episode 9 "The Fires Beneath"

Awakened by the destruction of his home by land devolvement, Zambolar went on a destructive rampage out of rage. The kaiju soon turned several sites into a blazing inferno, including the forest around him and a boiling river, until he was discovered by the Science Patrol while he was destroying a chemical plant.

While the fire at the plant was put out by the Science Patrol, Zambolar vanishing into the forests. Once it became known that Zambolar path of destruction was heading for Tokyo, the military was deployed to try to stop the walking inferno as well. Once Zambolar was found again, the military and the Science Patrol attacked, but their weapons failed to do anything and only served to fuel Zambolar's vengeful rage as the living inferno merely marched through their attacks using his heat.

Finally Ultraman stood up to face Zambolar, cutting him off and toppling him down a hill. Zambolar struck back using his heat bursts, but Ultraman managed to get the upper hand smashing Zambolar’s head into the ground repeatedly. After a relatively short battle Ultraman finally put down Zambolar, destroying the kaiju with the Specium Ray.

Much like his original appearance, Zambolar was awakened by loggers invading his home and thus went on a destructive rampage setting whatever was in his sights on fire as he was heading for Seattle (seeing as the series takes place in the US.) Unlike his original counterpart, Zambolar's heat was also used as an air-lance as most energy weapons (i.e. - Ultraman Powered's Mega Specium Ray) vaporized upon impact of Zambolar's body. Eventually he was confronted by Ultraman Powered. Realizing why Zambolar was enraged, instead of fighting the kaiju Ultraman Powered used his Willpower to cause the flames to die down, as a way of convincing the kaiju to stop his rampage and go home. Zambolar shockingly complies, as his flames die down in heat and he returns home.

Although not physically appearing, Zambolar is one of the hibernating monsters awakened when Genegarg crashed onto Earth. It was located in North America.

Combustion
Add a photo to this gallery
Powered Zambolar

Heat Cyclone
Add a photo to this gallery 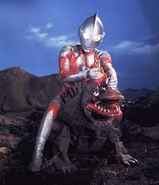 Behind the scenes filming
Add a photo to this gallery 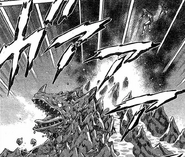 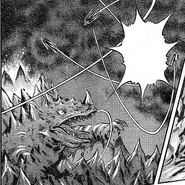 Figure of Powered Zambolar, created by Bandai.
Add a photo to this gallery

Retrieved from "https://ultra.fandom.com/wiki/Zambolar?oldid=468099"
Community content is available under CC-BY-SA unless otherwise noted.