Mirror Fight
Zailas (ザイラス Zairasu) is a Kaiju that appeared in Mirrorman and its spin-off series, Mirror Fight.

The Invaders were about to carry out a plan to wipe out mankind using a cosmic virus, but before it could be delivered the Self Defense Force sent a squad of jet fighters to shoot down the transport ship. Zailas, as a group of Invaders was sent to retrieve the case containing the virus. However, the SGM managed to retrieve and analyze it before he could. A second attempt to retrieve it was executed that night, Zailas ambushed the SGM before they could get it disposed. Kyotaro showed up and ran over an Invader to help out. After two of the remaining Invaders combined into one body a flying saucer fired a beam that turned Zailas into his monster form. The SGM chased the other Invaders and Kyotaro turned into Mirrorman. Both giants fought each other with neither landing a hit with their projectiles, forcing them to use bladed weapons. Projectiles continued to be launched at one another to no avail. Mirrorman eventually resorted to a throw and tackle before finishing Zailas with the Slicer H.

Zailas appeared once again as Zailas II (ザイラス二代目 Zairasu Nidaime) in episode 15 of Mirrorman, "The Mysterious Monster Screen". He was actually an illusion created by Jabala to scare the people. 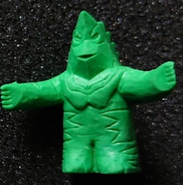