Zagoras (ザゴラス Zagorasu) is a Kaiju from Return of Ultraman, it first appeared in episode 25.

Zagoras was an alien monster who had come to Earth in order to create a meteor in order to return to space. The meteorite itself was creating magnetic waves by stealing materials/destroying environments to make itself bigger so Zagoras can leave. In order to help make the meteorite even bigger, Zagoras rampaged in order to help these waves attract more material for his meteor to get big enough to leave Earth. However, because his rampage and the meteor was endangering a nearby village, MAT had to stop him. However even with the help of a young boy who stole the MAT Gun, Zagoras's meteorite was complete and ready to take off, taking the village with him as its vessel. Realizing the boy and Minami of MAT were in danger, Go transformed into Ultraman Jack and tried to fight off Zagoras from leaving, but the island-shaped meteorite had started taking off, taking Zagoras, Jack, and MAT with it high into the atmosphere. Jack however would not give up fighting and after saving Minami and the boy by transforming his Ultra Bracelet into a miniature Travel Sphere, was able to destroy Zagoras by flying higher into the atmosphere and hurling the monster back into its own meteor, destroying both Zagoras and the meteor.

Zagoras was part of the Monster Army lead by Alien Empera, and was seen in an animated flashback fighting Father of Ultra along with Dangar, and Gokinezula. Burn On! The Six Ultra Brothers 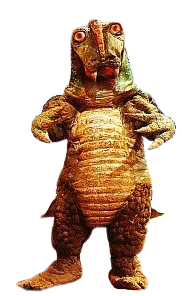 Zagoras first appeared in episode 58 of the show where he fought Redman at a sandy beach. They grappled with each other and then, after dodging explosions from his Red Knife, Zagoras teleported behind Redma, but even so, Redman had the winning hand for this entire fight, even if he went down, and killed the monster with a Red Knife to the mouth.

Zagoras then reappeared in episode 68, where he teamed up with Eleking to take down Redman as he took both of them on single-handedly and even though he had the team disadvantage, he didn't lose hope and managed to get back up on his feet every time he got down. After a long series of grapples, chops, kicks, and throws, Redman killed both monsters by throwing two Red Knifes at them, suffocating from the smoke and sparks from the weapons.

In episode 108, Zagoras started off his fight with Redman by knocking away the former's Red Knives. Soon after that, Gudon showed up to help him and together, they managed to get the jump on the alien hero. Even though he managed to get back up every time, Redman found himself overpowered by the two monsters. Nonetheless, he didn't give up, and after he defeated Gudon, the alien hero defeated Zagoras with a hard double kick to the face.

Zagoras reappeared in episode 113 where he once again teamed up with Gudon to fight Redman in a grassy field. Even though both monsters put up a good fight against the alien hero, the latter didn't give up and after a long fight with the usual movesets, he defeated Zagoras by throwing his Red Knife at his torso.

In episode 117, Zagoras teamed up with Gudon and Sadola to take down Redman in a grassy field and all three monsters held the upper hand in the fight against him by taking turns holding him and then punched and kicked him while he was at a disadvantage, giving the monsters the advantage at first. However, Redman didn't give up and fought back against the trio. After he defeated Gudon, Zagoras was defeated by the alien hero as he struck him hard in the neck with a double kick and Sadola would soon follow.

Zagoras reappeared in episode 118, where he teamed up with not only Gudon and Sadola again, but also with Alien Icarus to take on Redman in a grassy field. While Gudon and Alien Icarus were doing well against the alien hero, Sadola and Zagoras pitched in to help them out, making it very unfair for Redman. Even though all four monsters had the upper hand against the hero due to them overpowering him with their teamwork and strength, the former didn't give up and eventually, he killed all four monsters by throwing his Red Knife at them, killing them all in the process.

In episode 119, his final appearance in Redman, Zagoras teamed up with not only Sadola, Gudon, and Alien Icarus once more, but also with Shugaron as well. All five of them avoided getting killed by the alien hero's Red Knife twice by crossing their arms simultaneously. Redman tried to take on the monsters one at a time with his usual moveset of throws, grapples, punches and chops, but he was overpowered by their sheer ferocity and well-rounded teamwork. However, Redman didn't give up and kept up his assault until eventually, he defeated all five of them by throwing his Red Knife in the center of the circle of monsters, resulting in them getting knocked down and out by the explosion.

Figure of Zagoras by Bullmark 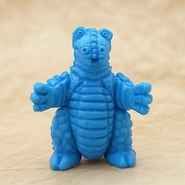