Ultraseven: The Final Chapters episode 6 "I Am an Earthling"

None
Zabangi (ザバンギ, Zabangi) is a Kaiju that appeared in episode 6 of the Heisei Ultraseven series, Ultraseven: The Final Chapters.

Zabangi was the weapon of the Nonmalt in their quest for vengeance. They planned to destroy Earth because their home planet was destroyed by humanity's ancestors. Once the Nonmalt's secret disguise was exposed, Zabangi was released from underground and immediately headed towards O-Parts Storage Facility to attack. Kazamori sent out Windom and Miclas to prevent the monster from reaching the facility while he, (as Ultraseven) stormed the facility himself to find the ancient casket that was already excavated. Zabangi easily overwhelmed both Capsule Monsters and wound up murdering them both by tearing off Miclas's horns and blasting Windom with his Superheated Fireballs (after the latter had been already severely beaten by Zabangi in battle). Ultimately, once the content of the casket revealed to be none other than the revived Furuhashi, he (Dan Moroboshi) recalled the dead Capsule Monsters and transformed into Ultraseven to face Zabangi himself. However, Ultraseven was very hesitant in going through with the task of killing him as he knew that Zabangi's duty was merely out of sadness for the tragic fate of what happened to his home planet. However, being an Ultra, as well as the fact that Furuhashi's plea about trusting humans stuck into his mind, Ultraseven had no other alternative and promptly stab Zabangi's engraved chest with the Eye Slugger, brutally killing the monster as his face was covered in the creature's blood. 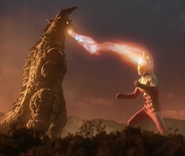 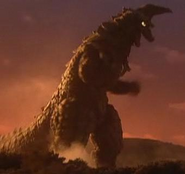