―Transformation announcement as a fusion monster

In use (Z and Geed)
Out of use (Zero, Celebro and Juggler)

Patrick Yu[1]
The Z Riser (ゼットライザー Zetto Raizā) is a transformation item and weapon that appears in Ultraman Z. Despite its name, its also known as the Ultra Z Riser (ウルトラゼットライザー Urutora Zetto Raizā), due to Ultraman Z's tendency to add the "Ultra" prefix.

So far, only four known models existed, with its prominent users being Ultraman Z (shared with Haruki Natsukawa), the Celebro in possession of Shinya Kaburagi and later Director Kuriyama, while Riku Asakura used it as an alternative to transform into Ultraman Geed in place of his Geed Riser[2]. It can also be wielded as a weapon by the Ultras who transform using the device, when used as a weapon, the slots fit by three blank Ultra Medals.

The Z Riser was originally developed in the Land of Light to help Ultra Warriors deal with berserk monsters throughout space, due to the emergence of the Devil Splinters. Ultraman Hikari, who was developing this device, required a "neutral" test subject and thus Ultraman Zero referred Z to him, who eventually got the device named after him.

Zero gave Z his Z Riser and three Ultra Medals prior to being sucked by Bullton. On Earth, the device is shared with his human host, Haruki, after merging with the recently deceased officer.

Meanwhile, the space parasite Celebro managed to steal one of the Z Risers from the Land of Light by possessing the space monster Genegarg. Through his human possession, Shinya, he used it in conjunction with the Kaiju Medals he crafted.[4][5]

"Darkness twinkling between the stars, grant me your dark power. From light to darkness, from darkness to light!"

While remaining hidden on Earth as Shota Hebikura, Jugglus Juggler took the opportunity to briefly steal Haruki's Z Riser during Peguila's rampage, where he summoned the Kaiju Medals of Zetton, Pandon and Maga-Orochi along with the power of the Phantom Universe (幻の宇宙 Maboroshi no Uchū) to clone said device into his own Dark Z Riser.[6]

When the Riser used by Riku Asakura was overloaded in a battle against a revived Gillvalis, Pega provided him with a Z Riser from Ultraman Hikari as a replacement. His last use of said device was during the fight against Greeza, and after that he gave his Medals to Haruki once his old Geed Riser was fixed.

Juggler's final time in using his Dark Z Riser was when he used Zeppandon to clash against Celebro/Five King while trying to save Haruki. It resulted with his custom-made device damaged, forcing him to resort to Windom in STORAGE's final fight against Destrudos.

While pursuing Alien Barossa alongside Yoko in space, the latter damaged Haruki's Z Riser and stole the Ultra Medals, forcing him to utilize GUTS Sparklence as an alternative while the Z Riser is under maintenance by Akito.

Some time later, the Z Riser was repaired, allowing Haruki to use it to transform again prior to his hunt for the escaping Celebro. 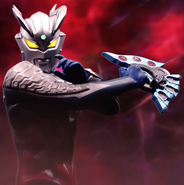 The user inserts their Ultra Access Card into the midsection as the Z Riser reads and grants access to its user. They then insert three Ultra Medals or Kaiju Medals into the blade and scan them through the reader. Transforming without the use of Medals will transform the user into their "default" form.[7]

After transforming, the Z Riser can be used as a weapon by switching to attack mode, and the three medals can be activated to perform special signature attacks.

Unfortunately, the Z Risers used by Ultras will not activate unless they try as hard as they can and their spirit is properly motivated. 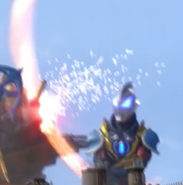 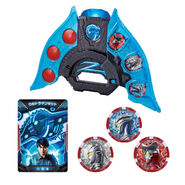 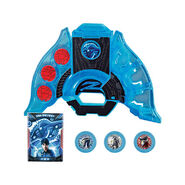 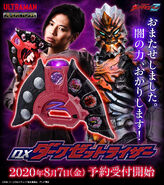 A promo for the Dark Z Riser