"Spear of light from the heavens, answer our prayers. Send the monster to a sleep beyond time."

In use
Z Lance Arrow (ゼットランスアロー Zetto Ransu Arō) is a lance/bow hybrid weapon utilized by Ultraman Z. It was born from a mysterious stone found in northern Alaska.[1]

Roughly 30,000 years ago, an Ultraman sealed away Peguila under the Alaskan permafrost, using the item as a guard over its seal. The item was rediscovered in the modern day and brought to the Teitoyama University Anthropology Research Center for analysis, freeing Peguila from the ice. Peguila started to make its way to the university to destroy the weapon so that it would never be sealed again. After sensing Haruki Natsukawa and Ultraman Z's determination, it reacted to them and showed its true form. Z used the weapon to defeat Peguila, and then Zeppandon, which Jugglus Juggler transformed into. First Juggling 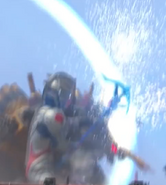 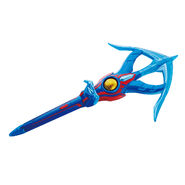 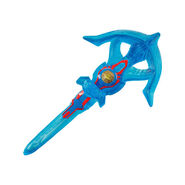 Draft version of the ancient drawing, by Tomoaki Koshi