"I will not follow anyone's orders."
"Fine, it's fine. I've successfully planted a heart in Zetton! (Alien Bat explodes)"
"I am my will, I shall destroy the Ultra Warriors."

Z (ゼット Zetto)[1] is the main antagonist of the second stage show of 2016 Ultraman Festival. He is described as the one who will bring an end to everything as well as the embodiment of the end.

Through the data of Zetton's past incarnations, Z was a biological weapon made by Alien Bat in hopes of getting his revenge against the Ultra Warriors, seeing that the monsters' past defeats are due to being "heartless", seeing the necessity of a Zetton to be given a heart. His creation was considered as a success after demonstrating his powers by killing a reinforced Super Grand King, much to Bat's own delight but unfortunately, Z developed sentience and killed his creator, wanting to perform the deed without obeying anyone's orders.

Carrying out his former master's plan to eliminate the Ultras, Z assembled an army of Zettons (original Zetton, Maga-Zetton, EX Zetton and Clone Zetton) in an attack against the Land of Light where he defeated both Father of Ultra and Mother of Ultra at once, but was stopped from killing them by Ultraman himself, who was later on assisted by other Ultras including Ultraseven, Ultraman Max, and Ultraman Scott, who battled against Zetton, EX Zetton and Clone Zetton respectively while Z escaped and Ultraman chased him down.[3][4] Z and the Zetton army headed to Earth, and were confronted by more Ultra Warriors including Ultraman X, Ultraman Zero, Ultraman Mebius, and then summoned Maga-Zetton from a Kaiju Card. He also defeated Ultraman while his army fought and defeated the other present Ultras. [5]

Just when all hope seemed lost, Ultraman Orb appeared. In the ensuing battle, Orb received the Ultra Fusion Cards of Ultraman Ginga and X, using them to initiate Lightning Attacker and wiping out Maga-Zetton with the Attacker Ginga X, then followed by the Sperion Ray with the other Ultras' beams. With Z left, he faced the original Ultraman and was defeated when they clashed their finishers. However in his final moments, he combined a regular Zetton with Alien Baltan, creating Zetton Alien Baltan as his final trump card.[6][7]

Maga-Zetton Kaiju Card
Add a photo to this gallery 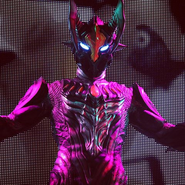 Z and his creator, Alien Bat. 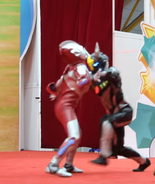 Retrieved from "https://ultra.fandom.com/wiki/Z?oldid=428401"
Community content is available under CC-BY-SA unless otherwise noted.