Yuya Hirata (平田雄也 Hirata Yuya) is a Japanese actor. He is known for his role as Katsumi Minato, the human host of Ultraman Rosso in Ultraman R/B. 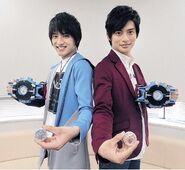