"Come on, don't look so down. Try smiling"

When Goldras appeared, the monster displayed it's time control ability by dragging various objects from various time periods including a mysterious girl. She was interviewed by GUTS where she revealed her name was Yuri Tezuka. With Yuri missing her old home and her old map useless in this era, Yazumi decided to take her on a tour of the city. After various stopped he gave her a necklace with her picture placed in it as a gift. When Yazumi was called into action, Yuri witnessed Tiga battling Goldras. Yazumi at the same time was ordered to fire at Goldras' horns and later realized if he was destroyed, everything from the past which was brought to the present would cease to exist including Yuri. Faced with the monster escaping to cause more havoc in the time stream, Yazumi was left with no choice, he fired Goldras' horns, giving Tiga the opening to kill him. Everything from the past later vanished including Yuri. Yazumi thought Yuri had died but in truth, she had only returned to her proper time period and a few decades later, she encountered a boy, she cheered him up by giving him her necklace. Returning home Yazumi dug through his old things to find the necklace realizing that old woman was actually Yuri, he smiled knowing she returned home to have a full life. 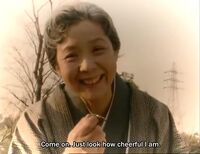 Old Yuri in Yazumi's childhood
Add a photo to this gallery

Retrieved from "https://ultra.fandom.com/wiki/Yuri_Tezuka?oldid=511436"
Community content is available under CC-BY-SA unless otherwise noted.