Mitsuko Hoshi
Yuko Minami (南夕子 Minami Yūko) was once one of Ultraman Ace's two human hosts, along with Seiji Hokuto her close friend. The two became hosts for Ultraman Ace after they lost their lives trying to help a group of orphans get away from the first Terrible-Monster of Yapool, Verokron. When they bring their Ultra Rings together the two combined to form the giant of light, Ultraman Ace.

Originally from the moon, her home was destroyed by Lunaticks, one of the oldest Terrible-Monsters. Most of her people were killed but some survived and wandered the galaxy as nomads. Yuko returned to Earth to fight against Yapool, but her comrades in space eventually called on her to their new home. This was around the same time Lunaticks appeared on Earth, eventually revealing her true nature to Seiji, as Ultraman Ace they avenged the lunar civilization. Afterwards she left, donning a white garb, she left her Ultra Ring and her connection to Ace for Seiji, wishing both Ace and Seiji goodbye as she left Earth for the moon to take part in rebuilding the civilization there.

She reappears once more with the Father of Ultra in a Santa sleigh. She comes to cure the people who have been blinded by Snowgiran with her arm. Afterwards she goes back to the moon and says goodbye to Seiji Hokuto. Resurrection! The Father of Ultra

Later on, during Ultraman Mebius' stay on Earth, she would appear to an older Seiji, fighting again as Ace, to help Crew GUYS Japan, against Lunaticks on the moon. Ace's Wish

An alternate reality version of Yuko appears with Seiji as his Earth-born wife. At the end when the Ultra Brothers remember their true selves she is seen helping the injured in the emergency medical station. She and Seiji had one daughter who helped her. At the end of the movie she and Seiji went off into space with the others. Great Decisive Battle! The Super 8 Ultra Brothers

Ultra Rings: Seiji and Yuko are each given a ring to summon Ultraman Ace. When the rings touch, both hosts combine to form Ultraman Ace. After Yuko left back to the moon, Seiji wore both rings and was able to transform into Ace on his own. 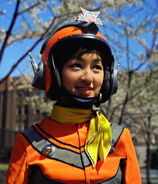 Yuko and Father of Ultra 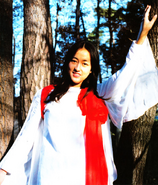