N/A
A detective investigating strange murders, Yosuke Endo (遠藤 庸介 Endō Yōsuke) is pulled off the case by the SSSP. Unwilling to be pushed aside, he eventually delves into a previously unknown world of aliens on Earth.

The detective in charge of investigating a series of murders. The veteran detective and his partner Kurata were baffled as how the strange murders could have been committed, before they could continue any further, they were called of the case by the SSSP's agents lead by Moroboshi. Infuriated by his dismissal and perplexed that the old organization was somehow still around, Endo voiced his displeasure with the situation to his partner as they drove down a highway. Coming upon a traffic accident Endo tried help a trapped truck driver, but his partner held him back on the premise it was to dangerous. Both were surprised when Shinjiro landed in front of them in his Ultraman Suit and rescued the bus driver from a fire by slicing off his side of the compartment. The two immediately began to question the young boy and Endo spotted the SSSP crest on the suit. When the young boy took of he declared that it was not an Ultraman they had just seen.

After that, Endo became fixated on finding out what the SSSP was hiding from the public and later returned to the scene of the latest murder with Kurata, the pair found nothing other than the fact that the victim was clearly a big fan of the idol Rena Sayama, something that troubled Endo, although he did not say why. Leaving the scene, Endo spotted the disguised four-eyed alien, who immediately turned around and ran off when Endo called to him. The two detectives ran after the alien, catching up to it only because it was hit by a car. Endo finally got his answer as he looked down at the unconscious alien and saw his face, although in their shock the alien got away. Later on, Endo spoke with Kurata explaining that the suspect was an alien, and declared he had to investigate the matter even more.

Later on, he rushed to the hospital after he heard his daughter Rena was caught in the battle. He was relieved to see she was alright and neither of them noticed the four eyed alien watching them.

Sometime later Endo and his partner Kurata prepared a trap for the serial killer, staying in an old derelict apartment, they posted a message on a forum and waited for the alien to show. Unknown to them, they were being monitored by the SSSP.

Endo and Kurata expected the little four eyed alien but instead they were attacked by Alien Bris whose exoskeleton made him immune to bullets. They were saved unexpectedly by the arrival of Moroboshi in his Ultraman suit who forced the alien out of the apartment. The two watched the fght until environment damage from the fight forced them to leave.

Later after another victim of the serial killer was found, the pair ventured out at night, called there by an unknown individual, who turned out to be Bemular. The alien told him that most of his theory about the case was wrong, leaving Kurata and Endo, who was crying for reasons unknown.

Later, Endo met with Bemular again who told him that Rena was in danger. Resolved to stop the threat on his daughter, Endo and his partner went backstage at her concert and apprehended Alien Igaru, who ultimately escaped, but not before telling him that 'he' was not the one targeting Rena.

Endo and Kurata arrived at the stage where Adad, and two 'Ultraman' where fighting. He arrived in time to see Bemular block Shinjiro's punch at the alien who was targeting Rena.

Yosuke Endo and his partner Kurata were police officers investigating a strange string of murders where the victims ended up being splattered onto the walls, baffling them. Their investigation was cut off by Dan Moroboshi and his team, and he officers left after Endo noticed the SSSP logo on one of their devices. While driving down the highway, Endo was infuriated that he job had been taken from him while wondering why the SSSP had come back. Endo and Kurata later went to investigate another murder elsewhere, and realized that they were connected to Rena Sayama. Looking around, they saw a suspect peeping at them, and chased him. Eventually, their suspect was run over by a car and when Endo went to investigate, he found out that he was an alien, giving him an answer to why the SSSP had returned. Unknown to the two cops, Bemular was watching them from above. An Alien Town

The cops decided to lay a trap for Igaru in an abandoned flat by badmouthing Rena, but they were unknowingly being observed by Dan Moroboshi. Unfortunately for them, Alien Bris arrived instead, and their guns were useless against the alien. They had to be rescued by Dan Moroboshi wearing the Seven suit, who engaged in a short battle with Bris. Bris was overwhelmed and had his left arm cut off by Dan, and started to plead for his life. Dan did not spare him and killed the alien without a second thought while the two cops escaped. The Curse That Is Ultraman Endo and Kurata ambush Igaru once again while he was rushing over to Rena's concert. Hidden Thoughts Igaru told them that Rena was in danger, and the three left together. After the battle between Agent Adad, Bemular, Shinjiro and Moroboshi was over, and Igaru was dead, Adad exposed the true culprits behind the recent murders, Kurata arrested the trio while Endo went over to comfort his distressed daughter. The Dawn of Truth

After being shown a photo of a new Ultraman, Kurata jokes that he and Endo should set up an alien investigation department. Surprisingly, Endo says that it's not a bad idea. Nice To Meet You, Big Brother 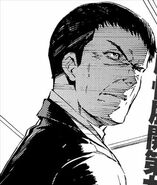