None
Yanakargi (ヤナカーギー Yanakāgī) is a Kaiju featured in the TV series, Ultraman Tiga, to celebrate 30th anniversary of the Ultraman Series. He appeared in episode 49 of the series.

In the year 1965, Yanakargi came to Earth pursued by Ultraman. The Ultra sealed the beast at the bottom of a lake in Japan. Thirty-one years later, an alien by the name of Charija travelled to Earth to find or buy a new monster. Unable to find a kaiju, Charija used a device to travel back to 1965. There he released Yanakargi from his wet tomb.

Daigo Madoka pursued the alien, but could not stand and watch as a monster went on a rampage. He transformed into Ultraman Tiga and began to fight the kaiju. After a long battle, Yanakargi began to drain Tiga's energy. Suddenly, due to Eiji Tsuburaya's strong will, Ultraman was summoned. Ultraman came to the rescue and healed his brother-in-arms. The two Ultras then fired their signature beams, the Zeperion Beam and Spacium Beam, killing Yanakargi. Charija then disappeared, vowing to return.

Energy Consumption
Add a photo to this gallery 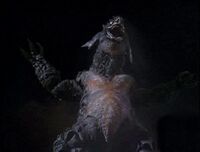 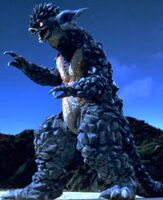 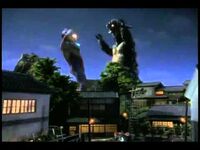 Add a photo to this gallery
Retrieved from "https://ultra.fandom.com/wiki/Yanakargi?oldid=511495"
Community content is available under CC-BY-SA unless otherwise noted.