In the years following World War II, the wreckage of the once-mighty IJN Yamato rested on the sea floor of the South Pacific. Small aquatic creatures (including barnacles and oysters) somehow merged with the wreck, creating Yamaton. Soon it made its way to Tokunoshima and attacked the docks. Tanks and fighter jets tried to attack it but were magnetised to the monster. As Ultraman appeared, he tried to attack but being a former battleship, Yamaton's body is already durable to the hero's might, even the Spacium Beam had no effect. Soon Ultraman was magnetised and was about to be devoured but instead of struggling to escape, he willingly got eaten, then destroyed Yamaton from the inside out, allowing the wreckage to rest in peace once again. 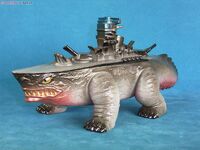 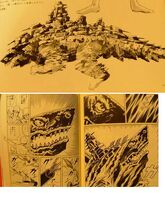 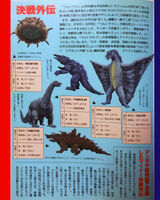 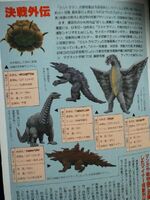 Yamaton vs Ultraman
Add a photo to this gallery
Retrieved from "https://ultra.fandom.com/wiki/Yamaton?oldid=513753"
Community content is available under CC-BY-SA unless otherwise noted.