Ultraman Wiki
Register
Don't have an account?
Sign In
Advertisement
in: Heroes, Other Heroes, Movie Kaiju,
and 3 more

In the film, Yak Wat Pho and Yak Wat Jaeng don't like each other and begin having an argument. The argument escalated until the two of them started beating each other with their clubs. Being immortal, they didn't do very much damage to each other before the gods stepped in and sorted out their issues. During their battle  they did manage to wreck the area between the temples and the river. This battle is what give the movie the name Tah Tien ("The Flattened Dock").

The treasure of Thailand, which has been stored in Wat Arun had been stolen by Demon Go-Ne, causing Thailand fall into chaos. Some time later in the film, Jum Killer Jr. comes down to destroy the city but is fended off by Yak Wat Pho. Despite his efforts, Yak Wat Pho is defeated by Jum Killer Jr. Wat Arun then sends Giant and Jumborg Ace to fight Jum Killer Jr, who has flown to the moon. Seeing this, Demon Go-Ne shot a beam which caused them to fight amongst themselves on the moon. During the battle, a crack formed on the ground and they both fell into it. Jumborg Ace saved Giant and they both came to. Together, they fought and defeated Demon Go-Ne's Monsters. 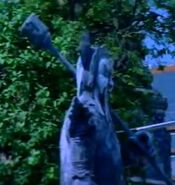