None
Yadokarin (ヤドカリン, Yadokarin) was a Kaiju from the TV series, Return of Ultraman, it first appeared in episode 29.

When Space Station #5 crashed to Earth, a hermit crab-like Kaiju made it its home. Hollowing out most of the ship, the beast remained out of sight until a young boy, Jiroh, found the fallen station and entered through the hatch. Disturbed by this, Yadokarin began to move about with MAT trying to rescue the boy trapped inside. Hideki Go summoned Ultraman Jack to save his young friend.

He managed to get the creature to leave the shell, but the Kaiju lashed out with its poison spray and pointed claws. The Kaiju tried to retreat back to its home, but Jack impaled it with his Ultra Bracelet and then fired his Spacium Beam. While Jiroh was rescued, the strange monster was burned to death. 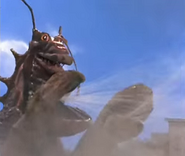 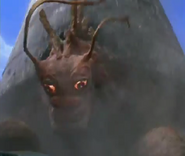 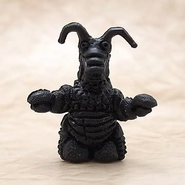 Yadokarin with the Space Station Shell 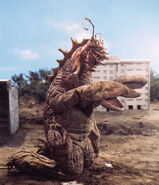 Yadokarin impaled by the Ultra Lance