A meteor known to humanity as the Evil Star was making its way around the Earth, causing animals to act extremely violent with monsters such as Gellon going on a rampage. The global defense force intended to use a special warhead aimed at the meteor's core to destroy it. However, unaware to them as they made their assault, the meteor had a guardian monster by the name of Xyclon. Easily taking out the global defense force's fighters, Xyclon easily overpowered the intruders of his star's territory and soon had to fight Ultraman Joneus just as he caught their warhead. Joneus, tired from his fight with Gadon, barely managed to hold his own until he flew near the sun to recharge his energy. Once recharged, Joneus fought against Xyclon, eventually destroying the monster with the Planium Ray so that the Evil Star could be destroyed by humanity. 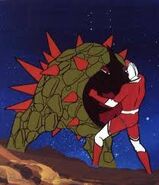 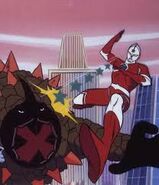 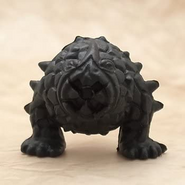 A Xyclon eraser
Community content is available under CC-BY-SA unless otherwise noted.
Advertisement