In use
The Xlugger (エクスラッガー Ekusuraggā) is the main weapon of Ultraman Exceed X and is stored in his forehead.

Daichi's father Takashi Ozora somehow found this ancient artifact, and lent it to his wife Haruka Ozora to study. During her prior research, she was unable to detect any radio signals from the future, which led her to believe that something would wipe out all life on Earth. However, she started picking up faint signals from the future coming from the Xlugger, indicating to her that it would have an impact on the future, before she disappeared along with her husband due to the Ultra Flare.

When Ultraman X was almost killed by Tsurugi Demaaga, the defeated Ultra Warrior's consciousness was trapped in cyber space, slowly dying. Daichi Oozora sent his own conscious into cyberspace, with the help of Dr. Gourman, to rescue X. While searching for his friend, Daichi was lead by a rainbow in cyberspace to the Xlugger. When Daichi took the Xlugger, he and X were reunited in the real world and X was given the powers of Exceed X.

The Xlugger finally took the form of Ultraman Exceed X's Spark Doll, ready to be utilized again when needed.

The Xlugger is a Slugger that is kept on Ultraman X's forehead. When put to use in combat the Xlugger extends in length to resemble a Ultra-sized short sword and is capable of dealing several energy attacks. 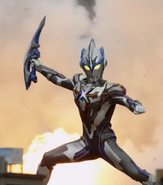