An Ultra Flare from the Sun had enveloped the Earth, causing all the Spark Dolls lying dormant in the land and ocean to be brought back as monsters. In order to counter the violent monsters and alien invasions that were happening one after another, humanity formed a special defense team, Xio, armed with the latest technology. Xio employs 2700 people including maintenance staff and its headquarters, Operation Base X (オペレーションベースX Operēshon Bēsu X) is located just outside of Tokyo.

Shotaro Kamiki (神木正太郎 Kamiki Shōtarō) is the captain of Xio. He firmly believes in understanding the enemy, trying to become friends with them instead of defeating them. While he understands that often monsters must be fought, he does not give up on his belief that humans should coexist with them, a trait he shares with Daichi.

Sayuri Tachibana (橘さゆり Tachibana Sayuri) is the deputy captain of Xio. She is mostly gentle but can be severe, acting as a mother to the team. She is in charge of strategy planning and analysis. She is also an expert in lifesaving.

Takeru Yamagishi (山岸タケル Yamagishi Takeru) is the operator of communications. He is very dutiful.

A high school rugby player, playing on Japan's national rugby team Wataru Kazama (風間ワタル Kazama Wataru) is very clumsy, but has a strong sense of justice. He is a seasoned officer with six years of experience, a good shooter, and operates the special investigations vehicles. He pairs with Hayato Kijima, though always seeing each others as rivals (this trait even affected their operations), but sometimes their teamwork often going out well. While Hayato pilots the Sky Musketty, Wataru would ride shotgun and control the firing assaults.

He spends his free time watching movies, preferably romantic movies with his favorite one being Roman Holiday.

Asuna Yamase (山瀬アスナ Yamase Asuna) is a ground combat personnel and skilled in martial arts combat. She is capable of piloting the Land Musketty single handedly and assigned to operate alongside Daichi in assigned missions. While seemingly a tomboy, she actually has a keen fashion sense.

She joined Xio as a cadet after graduating a local high school and her excellent performance led her to be promoted to a position in the investigation team. She joined Xio because she believed women had to fight too and not just leave the men to do everything themselves.

Hayato Kijima (貴島ハヤト Kijima Hayato) is Wataru's rival in the team, yet ironically were assigned as partners by Captain Shotaro. However, even if they are always at odds, their teamwork sometimes turn out just fine. Hayato is an expert of aerial combat, piloting Sky Musketty while Wataru controls the firing system. He is also considered the vanguard of the Xio Investigation Team.

Chiaki Matsudo (松戸チアキ Matsudo Chiaki) is in charge of communications, ect, working from the Xio headquarters, due to this, making her partnered with Takeru. Her hobby is music.

The Lab Team (ラボチーム Rabo Chīmu) is a division whose purpose is to investigate phenomenon and create Xio arsenals.

Daichi Ozora (大空大地 Ōzora Daichi 20 year old) is a member of Xio and the human host of Ultraman X. While he works in Xio's lab team, he can also be called into action whenever needed. He believes in trying to get along with monsters, a trait he shares with his captain.

An Alien Fanton, Dr. Guruman (グルマン博士 Guruman Hakase) is Xio's analyser and inventor. He is the only one that awares of Daichi's double life as Ultraman X, yet keeps this as a secret as well as helping him, starting with the creation of MonsArmor. 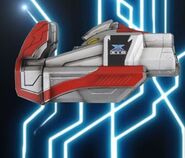 Ultriser in use
Add a photo to this gallery

Xio Athos
Add a photo to this gallery

Xio has a monster classification system that they use to identify monsters:

Retrieved from "https://ultra.fandom.com/wiki/Xio_(Xeno_Invasion_Outcutters)?oldid=466456"
Community content is available under CC-BY-SA unless otherwise noted.