The transformed Xio Devizer of Daichi, it transformed when X first called on Daichi, changing to protect him from Demaaga. Ever since then, X inhabited the gadget and allows Daichi to transform into him when needed.

Cyber Card loading & Realize
Add a photo to this gallery 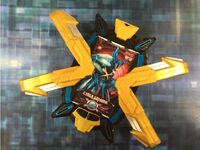 The Cyber Gomora Card slotted into the X Devizer 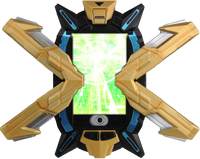 Infected
Add a photo to this gallery

Retrieved from "https://ultra.fandom.com/wiki/X_Devizer?oldid=511529"
Community content is available under CC-BY-SA unless otherwise noted.