XIG
XIG Fighters (ＸＩＧファイター XIG Faitā) are advanced fighter jets developed by GUARD and under the cooperation of the Alchemy Stars, and used by XIG. When stored inside the Aerial Base or carried by the Peace Carry, they remain in their hexagonal Container Mode. The fighters utilize the Repulsor Lift, an anti-gravity device developed by the Alchemy Stars (specifically Gamu) that enables vehicles to hover in the air. With this piece of technology, the jets can perform maneuvers that are considered impossible for standard aircraft.

The XIG Fighter SS (Sky Surfer) (XIGファイターSS (スカイサーファー) XIG Faitā SS (Sukai Sāfā))[1], labeled as "Fighter 1" (ファイター1 Faitā Wan), is the main fighter piloted by the leader of each Fighter Team. This advanced fighter jet has a hyper jet engine, giving it higher mobility than standard fighters. The SS is armed with laser cannons and missiles, and can also be equipped with hyperspace-destroying missiles. All of the SSs were destroyed when the Aerial Base rammed at Mokian.

The XIG Fighter SG (Sky Gainer) (XIGファイターSG (スカイゲイナー) XIG Faitā SG (Sukai Geinā))[4], labeled as "Fighter 2" (ファイター2 Faitā Tsū) and "Fighter 3" (ファイター3 Faitā Surī), are the support fighters piloted by regular members of the Fighter Teams. The SG is armed with Majort laser cannons and HEAT Missiles on each wing. It can also be equipped with bombs or liquid nitrogen bombs. All of the SGs were destroyed when the Aerial Base rammed at Mokian.

The XIG Fighter EX (Exciter) (XIGファイターEX (エキサイター) XIG Faitā EX (Ekusaitā))[6] is a reconnaissance and electronics warfare fighter made for commanders. It is designed to operate in the front line and give out orders to Fighter SSs and SGs. It is primarily armed with two Entashia Cannons and Laser Vulcan guns.[6] In addition to its fixed armament, various payloads such as missiles and Sidewinders can be mounted.

Although it was a fighter jet specifically made for Chief Tsutsumi, Gamu modified the jet to his own liking and piloted it into battle without permission. Since then, the EX became Gamu's personal fighter jet. Gamu also had his own artificial intelligence system, PAL, installed into the EX's Remote Flying System. This allowed the jet to fly without Gamu onboard.[6] The EX was actively piloted by Gamu in both combat and non-combat missions. When the Aerial Base was destroyed along with Mokian, it was presumed that the EX and PAL went down with them. However, the jet and PAL reemerged in episode 50 and attacked Zog to save Gamu. The EX was destroyed shortly afterwards.The Cry of the Earth

The XIG Fighter ST (XIGファイターST XIG Faitā ST)[11] is the successor to the Fighter SS. Overall performance and combat capabilities have been dramatically improved from the Fighter SS. Its primary weapons are two Repulsor Chargers that fire powerful laser beams.[11]

Although development on the ST was once halted, one jet was built and completed by Chief Kousuke Ranboshi and his development team.[11] Following the destruction of the Aerial Base, XIG pilots were introduced to the new Fighter ST and two GTs. The ST was piloted by Team Falcon Leader Yoneda. Together with the two GTs and the Peace Carry, the ST participated in the support mission for Ultraman Gaia against Zebubu. After a successful attack run, the ST received a hit and was destroyed in action. Fortunately, the pilot survived.

In Ultraman Gaia: Gaia Again, production of the ST was resumed and officially replaced the Fighter SS. Team Leader Yoneda piloted one of these jets to bring Gamu to Team Marlin for an underwater investigative mission. Later on, Team Leader Kajio piloted one and led Team Lightning to attack a cluster of Baiakuhe.[11]

The XIG Fighter GT (XIGファイターGT XIG Faitā GT)[11] is the successor to the Fighter SG. Similar to the Fighter ST, the GT's overall performance and combat capabilities have been dramatically improved from the Fighter SG. It is armed with four wing-mounted Repulsor Chargers in place of the HEAT Missiles.

Development on the GT was once halted, but two jets were built by Chief Ranboshi and his development team.[11] After the loss of the Aerial Base, these jets were piloted by Team Lightning Leader Kajio and Team Crow Leader Inagi respectively. The two GTs were active in supporting Ultraman Gaia against Zebubu and subsequent battles. When both Gamu and Fujimiya lost their Ultra powers to Zog, the GTs were retrofitted with a Repulsor Field device to reflect monster energies to the Ultra duo and temporarily revive them. During this operation, the two GTs were piloted by Team Leader Kajio and Team Lightning Member Yasushi Kitada respectively.

In Ultraman Gaia: Gaia Again, production of the GT was resumed and officially replaced the Fighter SG. Two GTs were piloted by Team Lightning Members Kitada and Ogawara and launched attacks on a cluster of Baiakuhe.[11] 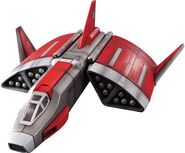