Defend the Earth from the Radical Destruction Bringer

XIG is led by Commander Akio Ishimuro and headquartered in the Aerial Base, a hovering sky fortress. XIG utilizes the Repulsor Lift technology, invented by Gamu Takayama, to allow their base and mecha defy gravity and make maneuvers that are considered impossible for normal aircraft.

XIG is the largest and most specialized defense unit of any in the Ultraman Series thus far, consisting of an Operation Crew, three Fighter Teams, and three Expert Teams (land, sea, rescue). Each Team has its own vehicles, a customized patch sewn on the left upper arm of the uniform, equipment, and gear.

XIG was formed under GUARD at the behest of the Alchemy Stars after they predicted a time of Calamity connected to something called the Radical Destruction Bringer. While unable to ascertain the identity of this entity or phenomenon, they were able to figure out that the Earth and its people would be targeted by outside interference that sought the end of mankind.

The network of young geniuses came together and developed the advanced technologies XIG would use to battle against the Radical Destruction Bringer and its minions.

The Airborne Carrier Base "Aerial Base" (空中母艦基地「エリアル・ベース」 Kūchū Bokan Kichi Eriaru Bēsu) was an airborne fortress operated by GUARD and XIG. It was the home of XIG and was the first line of defense against the Radical Destruction Bringer.

The Geo Base (ジオベース Jio Bēsu) is a facility which acted as the center operations for GUARD Japan. It served as the temporary base for XIG after the Aerial Base's destruction.

After the final battle against Zog, GUARD proceeded to build a new Aerial Base. The Aerial Base 2, upon its completion, would become XIG's new headquarters and reestablish GUARD's first line of defense.

An elite fighter team comprised of young ace pilots. They are considered the "Top Gun pilots of the Defense Force" by Staff Officer Chiba. Despite being XIG's best fighter pilots, their gun shooting skills and physical endurance are lacking. Team Lightning's helmets are plain white.

A fighter team comprised of veteran pilots. Their helmets have gray patches with yellow outlines.

A fighter team comprising entirely of female pilots who like rock music. Their helmets are painted with red patches.

XIG's expert land assault team. They are often seen in the body training room (gym) on the Aerial Base. They also wear plain white helmets.

XIG's search and rescue team. They wear plain white helmets, and their respective numbers are in navy blue.

A team of marine specialists. They wear a navy cap and have their uniform shoulder pads in cobalt blue instead of the regular yellow.

XIG deploys different mecha depending on the mission at hand. Most of XIG's mecha are stored as hexagonal 'Container Vehicles' (also known as ‘Container Mecha’), which are transported to the battleground and airdropped by Peace Carry. Fighter mecha are also able to launch directly from the Aerial Base's three Chamber Launch Gates. 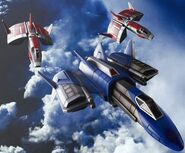 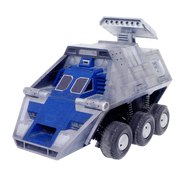 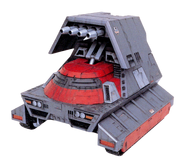 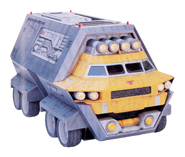 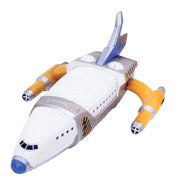 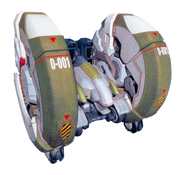 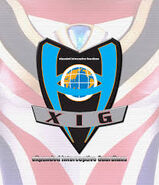