X-Savarga (サバーガ Kurosu Sabāga "X" is read as "Cross") is a Kaiju that first appeared in episode 36 of Ultraman Gaia.

X-Savarga appeared from a wormhole that Hiroya Fujimiya made to attack the XIG airbase using Gaia V2's Photon Crusher which was a copy of attacks that was used to awaken and summon Zoruim, but something went wrong and the monster attacked Hiroya, but Ultraman Gaia blasts his hand and saves Hiroya. On Earth, Gaia and X-Savarga resume their fight but he regenerates his hand and attacks him with the drill and launches parasites out of his hand, but Gaia blows them up but with half his energy gone. Gaia tries and blast him with his Gaia Slash but is soon deflected when X-Savarga stomps the ground and a piece of rock comes out and hits it. Soon the fiend makes clones of him self and they start attacking Gaia. Fujimiya finds a weakspot on his back and throws a bomb on it. blowing up it destroys the clones. At that chance Gaia starts beating down the fiend. At last Gaia goes into Supreme Version and uses the Supreme Kick and hits X-Savarga in the head, blowing him to pieces.

X-Savarga was released in the Ultra Monster Series in 1999 and is number 133. He is 6in tall and his coloring and design are accurate but the gold and purple are brighter and the drill is shorter, thicker at the beginning and can easily be pulled off, but he is still a good figure and is accurate to the show's monster. 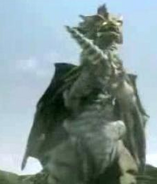