Wutan's design is based on an orangutan.

In his appearance, Wutan was sent by Mad Go-Ne to attack Earth. He revived four previously defeated monsters, King Jaigras, Antron, Dokuros King, Mad Saturn, Mighty Gross and Demon Star in the monster graveyard in space. They formed the Ghost Monster Corps (亡霊怪獣軍団 Bōrei Kaijū Gundan). While Jumborg Ace was busy fighting the them, he had a chance to invade Earth. Later, Jumborg Ace headed back to Earth to battle the rampaging Wutan. Jumborg Ace burst Wutan's red balloon cheeks with a knife. He then used the deadly windmill and cut Wutan's body into two. Wutan blew up in a large explosion. 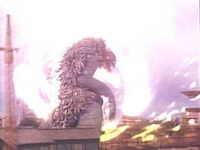 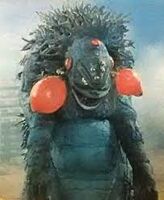 Add a photo to this gallery
Retrieved from "https://ultra.fandom.com/wiki/Wutan?oldid=524394"
Community content is available under CC-BY-SA unless otherwise noted.