"Once Woola lands on a planet, it would eat the entire crust before swallowing the planet whole. Its birth planet was said to be the first one it ate."

Woola's name comes from the Chinese phrase for "I am hungry" (我饿了 Wǒ è le). It was named by Sotaro Hayashi and confirmed by Takao Nakano.[2]

Woola was somehow created from the waste in space that was dumped by advanced civilizations across the universe. It flew across space as a meteor, devouring many stars and destroying many planets by consuming their nucleus. The first planet it devoured was said to be the one responsible for its birth. It traveled across planets pleading for help as it was constantly hungry due to the black hole inside itself, but its primal instincts instead led it to devour each planet it visited, consuming not only these planets, but the negative emotions of their inhabitants as well, which caused Woola to become deformed into its current state. Several androids were made and deployed throughout the universe with the ability to disrupt Woola; one of which landed on Earth and became known as Pirika Asahikawa.

Kirisaki/Ultraman Tregear discovers Woola's existence after invading Pirika's mind, and sets out to bring it to Earth to cause destruction. Withstand the Lightning Strike! He uses the drill missile from Alien Ghose' ship to strike at the Earth's Ether, which causes the planet to send out a signal across space that Woola detects, changing its flight course. Friend in Earth

Woola lands on Earth, activating Pirika's protocols. Kirisaki summons Galactron MK2 from its Kaiju Ring as bait for it to emerge to the surface. Ultraman Taiga Tri-Strium tried to fight Woola, but he made the mistake of firing the Taiga Tri Blade's Tri-Strium Burst directly into Woola's mouth, which did nothing but provide the creature with more sustenance. After firing the beam for a prolonged amount of time, Taiga became weak, allowing Woola to get close, grab the Taiga Tri Blade in its jaws and yank it free from Taiga's hands. Woola then attempted to consume Taiga, draining his energy and forcing him to retreat just to survive the onslaught.

A short while later, Woola re-emerged at the same location it had appeared before. Injured but not defeated, Hiroyuki set off to fight the monster, and was given words of encouragement from Taiga, Titas and Fuma. I'm Pirika However, their efforts prove futile as Taiga is defeated once more. Woola burrows underground and causes destruction to nearby infrastructure. Inside Woola, Pirika was able to communicate with the monster and learned of how it came to be, and that it had no malicious intent, and was merely looking for anything to satiate its unending appetite. Sympathizing with Woola, Pirika contacted EGIS to inform them of what she had learned, and that she wanted to save Woola. Maguma and Markind decided to help EGIS and devised a plan together to neutralize Woola's black hole. Maguma and Homare fired a Magma Wave from his spaceship, baiting Woola to the surface. They then fired a missile containing a white hole that counteracted the black hole inside Woola. They then relied on Taiga to fire his Ultra Beam at Woola to feed it and hopefully satiate it.

Just before the plan could be completed, Tregear interfered and tried to stop Taiga. Woola tried to help the Tri-Squad after recognizing them as allies, but easily gets shoved aside by Tregear. Tregear makes the mistake of firing a dark energy sphere at Taiga, which he redirects to Woola using the Taiga Wide Shot. Woola eats both attacks and its body is destroyed, while its core floats upwards and dissipates into a glittering light that spreads across the Earth, simultaneously redeeming and ending the once world-threatening Kaiju. Buddy, Steady, Go! 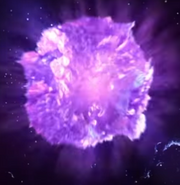 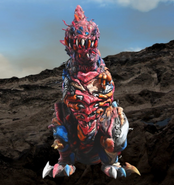 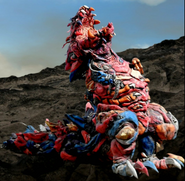