Woo (ウー Ū) is a strange supernatural Kaiju that watched over the snow capped Phantom Mountain, seemingly protecting an orphan girl. After several attempts were made at the girl's life, Woo began to rampage about the mountain and Ultraman intervened. Woo only stopped after the orphan girl succumbed to the cold after being chased by local huntsmen.

A second Woo, this time representing the spirit of a young girl's deceased father, emerged in the mountains of Japan to fight the Terrible-Monster Iceron several years later. Though Iceron proved too strong for him, Woo II's fight wasn't for nothing, as it gave Ultraman Ace a chance to step in and finish the fight.

Woo's name is derived from a previous Tsuburaya project.

Woo is based upon the Yuki-Onna Yokai of Japanese folklore. Her overall design resembles the yeti.

Named such for its never-ending white coat of snow, Phantom Mountain was the home of a unique legend. It was said a furry creature, Woo, watched over the land and protected a mysterious young girl named Yuki after her mother and former guardian died. When the girl was threatened, the monster would appear, warding off any hunters that scared her. Sightings of the monster began to grow more numerous, thus the Science Patrol was called in. Soon the creature appeared near the ski resort! A lone hunter shot it repeatedly, but before the monster could retaliate, Yuki begged it to leave. The creature did as it was told and left as mysteriously as it had arrived, but now a full hunt was on for not just the beast, but also the girl that could control it! The Science Patrol managed to discover the furry monster just as a group of hunters gave chase after the girl. Pummeling the beast with rockets, the patrol couldn’t destroy Woo, and the beast forced their VTOL down.

Enraged at both its attack and the hunting of Yuki, Woo attacked the resort! Resting with a twisted ankle, Hayata saw the creature coming and transformed into Ultraman. The hero challenged Woo and the two quickly engaged in combat, trading blows one after another. As the war raged, however, the injured Yuki finally collapsed in the snow. The chase had drained her and the cold was sending her into hypothermia. As Ultraman watched on, Woo began to vanish as the life faded away from Yuki. Once her heart stopped beating, the strange monster disappeared entirely. Phantom of the Snow Mountains

With a new mountain-dwelling monster named Iceron on the loose, attacking TAC and threatening several locals, one such individual, a small girl, manages to summon a second Woo, who was the ghost of the girl's late father.

Woo battled with Iceron, but was quickly beaten and sent tumbling down a mountain valley. Unable to fight further, Ultraman Ace stepped in to save the Kaiju and finish off Iceron. Despite the rather dramatic nature of his defeat, Woo II turned out to have survived after Ace defeated Iceron, and disappeared into the mist. Winter of Horror Series - Mystery! The Resurrection of the Monster Woo

Woo is one of the monsters revived along with the rest of the four monsters. Later she faced one of the Ultraman clones via Ultraman's new ability. After a short battle, the monster was not seen again, leaving her fate uncertain (Woo was probably defeated offscreen). Revive! Ultraman

Woo first appeared in episode 19 of the 1972 Redman tokusatsu series where he got chased after he distracted Redman from chasing Kanegon and then the two monsters teleported behind the hero and fought him. They proved to be a worthy challenge for him but then the two ended up getting killed by impalement from the Red Arrow simultaneously.

Woo reappeared in episode 20 where he fought Redman on his own. He would've lost if Gomora didn't show up to help him. Together they managed to overpower the alien hero but he never gave up and eventually he killed them both with his Red Kick.

Woo reappeared in episode 21 where he fought Redman but got killed after being judo thrown by the alien hero, all the while being watched by the vengeful Gomora.

In episode 22, Woo reappeared and fought Alien Mefilas at first, but when Redman showed up, they decided to work together to fight the hero, and they had the advantage at first, but the hero never gave up and eventually he turned the tables against them and killed them both by throwing his Red Knifes at their chests.

Woo reappeared in episode 24 where he was running around until he heard Redman shout out "Red Fight" and decided to run away and teleport from him but his location was revealed as he threw his Red Knife at him. During their fight, Redman held the advantage against the monster and eventually won with his Red Chop.

In episode 64, Woo started out his fight with Redman at a beach by preventing himself from getting killed by his Red Arrow by catching it. He had Redman on the ropes when he threw it at him, resulting in the area being covering in smoke, fire, and sparks, but then the hero crossed and uncrossed his arms and the area was cleared out in seconds. The hero then caught up to the fleeing Kaiju and used his usual beatdown tactics against Woo. Even though he did manage to hold his own against him, the Kaiju eventually lost with one last judo throw to the ground, resulting in his death.

Woo reappeared in episode 72 where he ran down the sandy hill with Redman and then started to fight him.They both countered each other in their surprisingly evenly matched out fight by throwing and punching each other and the fight eventually came to an end when Redman summoned his Red Arrow and killed Woo by punctuating his chest with it.

Woo's final appearance on the show was in episode 76, where he teamed up with Garamon to take on Redman at a beach. Despite having the odds stacked against him, the alien hero held his own against both monsters with his judo prowess even with his Red Knife thrown out of his grip by the monsters. Woo was eventually defeated when the hero chopped him so hard he fell to the ground, with Garamon following pursuit. He then threw his Red Arrow at the monsters that exploded soon afterwards.

Woo appears as a character in the OVA Ultraman Graffiti: Wild! Ultra Country, however, the fur surrounding the monster has become long flowing hair. As such, her full body is shown, but wearing a bikini. She appears in the opening, walking by Ultraman, his two children and Gango, causing a small blizzard, acting as a YukiOnna of Japanese Mythology.

Woo became the love interest of the OVA's perverted Kanegon, despite being 'rich', the coin eating monster got no where, and it was up to the Ultraman family to make them see a romantic connection. 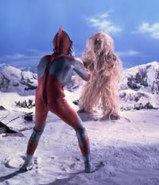 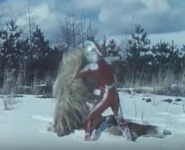 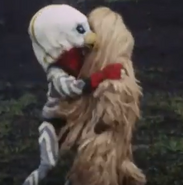 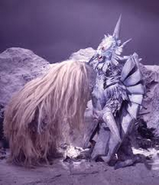 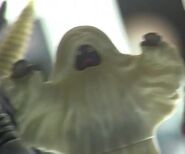 Woo as she appears in the OVA, Ultraman Graffiti 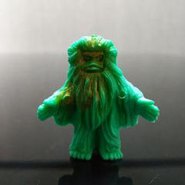