The Wolf Gas (ウルフガス Urufu Gasu), are alien creatures from Ultraman Gaia. One appeared on Earth from space after arriving in a small capsule, and was eventually returned back to outer space by Ultraman Gaia. Months later, unidentified aliens brought several cyborg versions of the Wolf Gas creatures, known as Wolf Fire (ウルフファイヤー Urufu Faiyā), to Earth as a means to abduct and study humans.

Wolf Gas fell to Earth somewhere in the Tokyo residence during night time and encountered a hot blooded civilian who attempted to fight Wolf Gas, this provoked Wolf Gas into injuring the man even though Wolf Gas was very frightened by its new surroundings. XIG wanted to capture the wolf-like alien, but Wolf Gas escaped everything they used to catch it and then just disappeared during the day. It wasn't until they used a giant tranquilizer dart shot from one of Team Lighting's XIG Fighters that the were able to detain it. However, as soon as the sun came up, Wolf Gas evaporated while unconscious. XIG realized that Wolf Gas was lost and wanted to go back to his own planet.

The next night Wolf Gas absorbed natural gasses from giant pressure vessels, causing him to grow to a giant size. Rampaging through an oil refinery, Hiroya Fujimiya saw the monster and transformed into Ultraman Agul. Wolf Gas was a match for Agul due to his jumping abilities. When Agul was about to kill Wolf Gas with his Photon Crusher, Gamu transformed into Gaia pushed the monster out of the way, using his Photon Edge to block Agul's attack. The two Ultras then began to fight until XIG's Team Lighting shot Wolf Gas with a special chemical dart, reverted Wolf Gas back to his gaseous form. Wolf Gas then retreated into on of the pressure vessels, Ultraman Gaia then carried the vessel into space.

Months later, unidentified aliens created cyborg version of the Wolf Gas creatures by attaching a small rice sized Physicality Enhancement Chip (身体能力強化チップ Karada Nōryoku Kyōka Chippu) on the back of their necks. the upgraded group of "Wolf Fire(s)" were used to subdue strong human men long enough for the aliens to implant the men with the same type of chip that created the Wolf Fire cyborgs.

During the middle of the night, the same hot blooded man that encountered the previous Wolf Gas, encountered one of the Wolf Fire cyborgs and once again tries to fight it, but is only injured again. Before the Wolf Fire can subdue the man however, Senuma Ryuichi and GUARD arrived and shot the cyborg, causing it to he dissipate. Later when more Wolf Fires appeared all over the city, XIG's Team Lightning was sent to kill all of the beasts that where in the city.

Meanwhile in a pair of Wolf Fires attack a professional wrestler who was training in the forest and subdue him long enough to be implanted with the alien chip. The wrestler was Shinya Hashimoto, the cousin of XIG'S Team Hercules member Takanobu Kuwabara, who returned to Tokyo after finds out the chip makes people's physical movements sharper and more powerful the encounter and was discovered by Gamu Takayama, who was able to trace the aliens signal back to the forest. Ryuichi, Shinya, and Shinya's trainer go back to the forest where they are soon met by the remaining couple Wolf Fires and soon find there masters space ship. After Ryuichi destroys one of the last Wolf Fires, the aliens turned the very last one into a giant, which proceeds to burns the forest. Ultraman Gaia then appears to fight him, and quickly defeats the cyborg after transforming into Supreme Version. 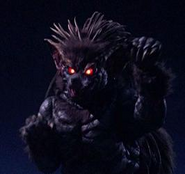 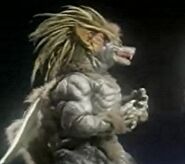 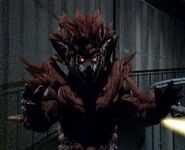 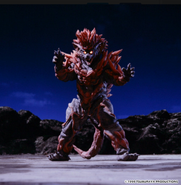 Wolf Gas in a stage show
Community content is available under CC-BY-SA unless otherwise noted.
Advertisement