WoO (ＷoO, Ū) is the only survivor of his species and wandered in space on a comet until he crashed on Earth. There, he met Ai a junior high school 2nd year student who’s school is then attacked by a giant monster, which resulted in her being the lone survivor of the attack after their encounter. WoO develops a strong bond with her saying that he will protect her at any cost. He uses his antennae to connect to electronic devices (mainly a cell phone) to communicate with her. Both are chased by a mysterious organization called SWORD who sees WoO as a threat to humanity. At the same time giant monsters have begun to invade the Earth in search of WoO who must now fight both SWORD and the monsters for his survival.

The shape WoO used to travel in space.

Transform: When needed, WoO can transform into his inflated form or merge his energy with another being to become Aikichi WoO. He can also transform his body to blend in with his surroundings, becoming the shape of something like a backpack.

Kaiju: When angered or afraid, WoO’s eyes will glow red and he can summon an alien kaiju that will fall from the sky in a meteor a short distance from his location. These kaiju are completely uncontrollable and WoO himself usually has to fight them in his inflated or Aikichi forms.

WoO reverts to this form due to exhaustion fighting as a giant. It takes water to revive him into his normal form.

Due to WoO's shapeshifting abilities, he takes this form when traveling with Ai to disguise himself from public.

Explosive Cannon Ball: By forming a cannon ball with his body, Aikichi WoO can launch himself out an opponent. On contact, an explosion will burst from impact and send a surge of energy through the opponent, destroying all but the strongest enemies in a larger explosion.

WoO Tornado: When needed, Aikichi WoO can spin his body around at such high speeds that he will form a tornado, capable of lifting up trucks and cars off the ground. As he spins around, he can kick the objects out, launching them at an opponent. Once this attack is finished, WoO will be extremely dizzy for a short period.

Fountain Kick: When kicking a small vile of water, Aikichi WoO can increase the amount of water that shoots out. A small glass can turn into several large blasts of water that fly forward.

Weaknesses: After a battle Aikichi WoO will turn into a small fossil-like object that can only be revived by water. 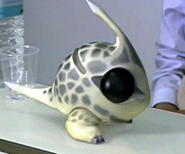