Ultraman 80 episode 8 "Revival of a Legend"

Unknown
The Warrior of Light (光の戦士 Hikari no Senshi) is an unknown being with powers similar to the Ultras. He appeared in episode 8 of Ultraman 80.

In ancient times, a monster known as Tabra used to feed on humans, until this enigmatic being appeared. The being attacked the monster, then like all Ultras, it used a ray of energy to finish the monster. However, the ray did not destroy the monster, but rather sealed it in a mountain for eternity, or so it was intended to be.

The Warrior of Light was released an a W.C.C. limited edition Ginga Renpou Sofubi Series. 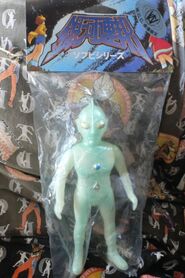 Close-up of the Warrior of Light. 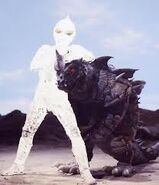