Ultraman Fighting Evolution Rebirth
Waroga (ワロガ, Waroga) is an alien that appeared in episodes 13, 14, and 48 of Ultraman Cosmos.

Appearing on a night from seemingly out of nowhere, Waroga attacks a young woman named Reni Kurosaki in a small town. Once Musashi arrived he quickly transformed into Ultraman Cosmos to fight Waroga. However not long into the battle, Waroga turned into a purple orb and flew off while cosmos turned back into Musashi to bring Reni back to the base. That night Waroga decide to awaken an ancient monster from beneath the ground by the name of Galbas to assist him. When EYES tried to learn about Reni and thus why Waroga was targeting her, they soon discovered she had virtually no records whats over and upon a medical examination from SRC, She had some sort of alien technology in her brain like a beacon. Upon investigating further up the chain of command, Musashi found out from an intelligence officer that Reni was a presumed casualty in an accident while on a mission in a satellite and since she was sucked into space her body was never recovered. Reni remembered sometime later as Musashi managed to flee with her form a research institute that wanted to dissect her that Waroga actually saved her when she was in a vacuum of space. During this time Waroga set Galbas loose to cause some havoc to lure Cosmos out and managed to takeover EYES's computer to during this time of prevent them from assisting. After Galbas nearly knocked out Cosmos with a fireball and destroyed a nearby electric plant Waroga arrived on the scene making the situation much worse. Once Galbas destroyed a squad of tanks and Cosmos reverted to human form, Waroga fled the area quickly. The next night however a special device was activated that destroyed the chips that allowed Galbas to be controlled by Waroga. Comos to challenge him with the hero going from Luna to Corona Mode. Although the battle was difficult, Cosmos managed to destroy Waroga with a shoot of the Prominence Ball. Daughter of Time: Part 1 Daughter of Time: Part 2

Waroga reappeared again months later where he planned a scheme to eliminate Musashi/Cosmos by revealing the place for him and EYES and JADF Forces to combat. As the battle rages, Musashi is about to transform but knocked by one of Waroga's beam. The next day, Waroga revealed that he will attacked the SRC Medical Centre as everyone evacuated from the hospital and the place now becoming a battlefield for Waroga and Earth Defense Forces. With all defenses proven ineffective, Musashi finally awaken from a coma and transform into Cosmos. Though Waroga managed to overpower him, but Shinobu pilots the TECCH Spinnar and a surviving army tank attack its eyes. Cosmos took this opening and destroys him with Blazing Wave. Waroga Counterattack

In the series, he doesn't have any transformations, but in the game he has one transformation named Chaos Waroga (カオスワロガ Kaosu Waroga). 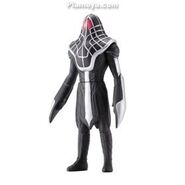 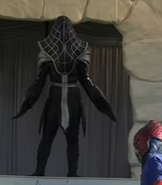